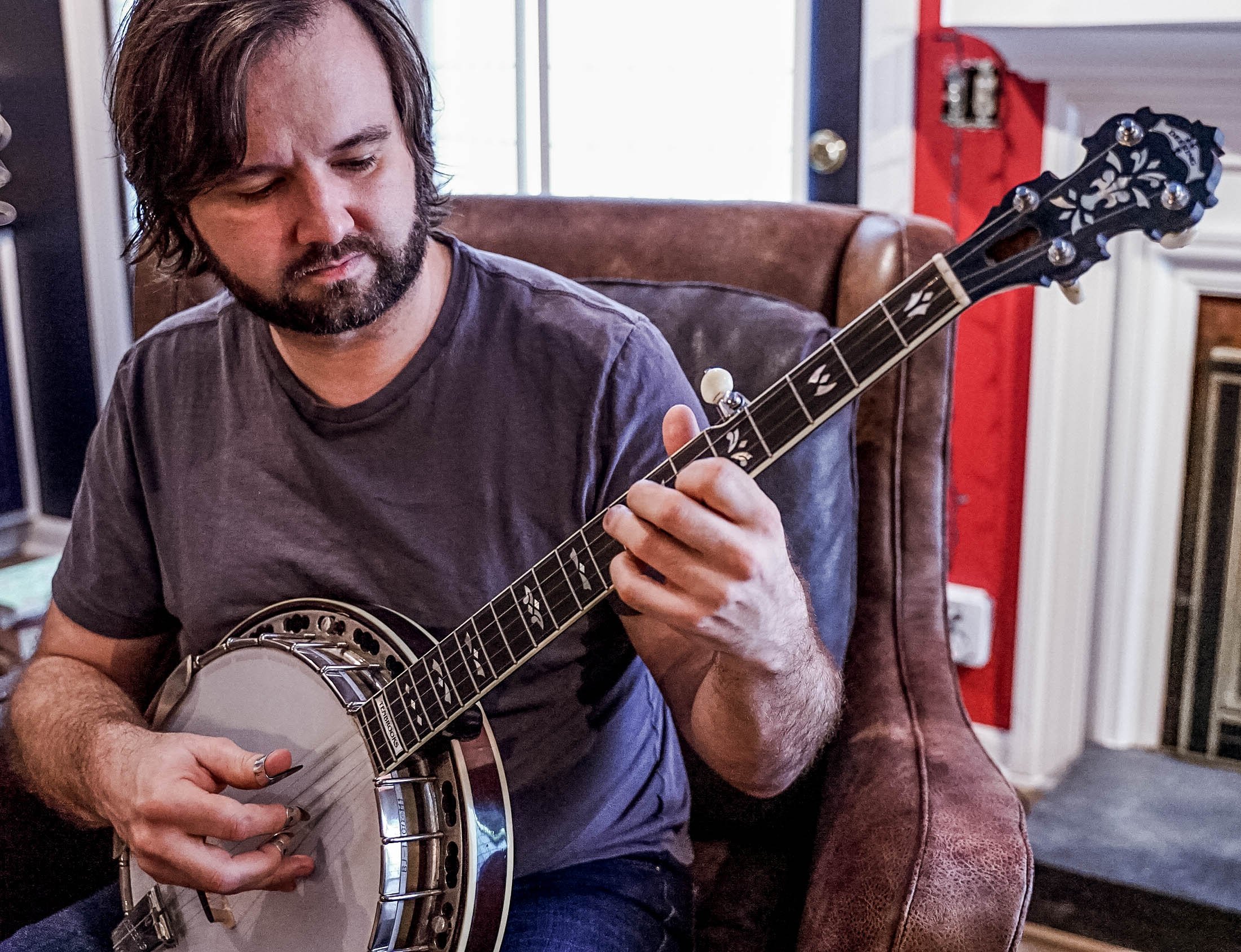 Ryan Cavanaugh is an outstanding banjo player who exemplifies the bold spirit of today’s young musicians. Like many in today’s mobile society, Ryan grew up in various parts of these United States; New Jersey, Montana, Pennsylvania and North Carolina. Asked which of these areas most encouraged his love of music and banjo, he said: “North Carolina was by far the best example of a culture steeped in banjo tradition. I was lucky enough to have moved there early in my banjo playing years to witness and learn from some old local masters.”

FAMILY ROOTS
Family roots have an influence on us all and Ryan’s own family history is a good example of how a musical environment can nurture the gift of a young artist. Ryan’s father, Larry Cavanaugh, was his first inspiration in music and on the banjo. His paternal grandmother played piano and his maternal grandfather played reeds. But it was his Great Uncle Pat O’Gorman, who came from Ireland in the early 1900’s, that inspired the family with traditional Irish dance tunes played on his Vega 5-string banjo. Because of this, Larry bought his own 5-string banjo, learning Celtic and 3-finger style banjo and passing it on to Ryan. Like many artists, Ryan is mostly self-taught but, along with his father Larry, he also mentions Steve Cashell, a local music teacher in Billings, MT, as his early teachers.

WHY BANJO?
Why banjo, we asked? “I grew up playing for family and friends. I think the positive reaction to the banjo’s unique sound is what drew me to it as a performing instrument. The banjo always seemed to have a very uplifting effect on whoever was listening to and watching me.”

Ryan’s first Deering banjo was our electric Crossfire. “I discovered electric music as a teenager and just had to have a Crossfire. I never chained myself to tradition and always kept an open mind. The Crossfire is just plain fun. It inspires creativity and really helped me find new territory on the banjo.”

The Deering Tenbrooks banjos are created to meet the demanding needs of professionals as well as the discerning desires of all banjo enthusiasts. Ryan has chosen the Tenbrooks Legacy to take him on through the next leg of his journey with banjo. Why? “My friends Jens Kruger and Ned Luberecki couldn’t speak highly enough about the Tenbrooks line of banjos. I always liked the sound of mahogany banjos and Janet (Deering) recommended I try a Legacy. I was very happy with it right off the bat. It’s just a world class sounding instrument all around.”

INFLUENCES
Music has a strong effect on those who hear it and an even stronger effect on those who dedicate their lives to it. For Ryan, the banjo and music are one in the same. “Music has enriched my life in countless ways. The improvisational style of music I like to play attributes to positive thinking. Nothing negative has ever come to me from playing music. Music has improved the way I think and be. In turn, my music grows with me. One’s true art is one true self and learning that lesson has helped me grow as a performer.”

This kind of growth is nurtured and inspired by professionals along the way. Ryan spent the last 6 years touring with jazz sax virtuoso Bill Evans and his famous group of fellow musicians. Because of this he credits Bill and guitarist John McLaughlin with a profound influence. “Bill and John are pinnacles of musical greatness on their respective instruments as well as down to earth human beings.”

Audiences, too, have a great influence on artists. “It’s touching that my music has attracted such a wide variety of listeners. Still in the early stages of my career, I’ve received fan mail from all walks of life and spanning the globe. The inspiration that comes from that is priceless. It encourages me to compose more music and to keep following my musical intuition.”

ON TO THE FUTURE
The future holds much in store for Ryan and he is looking forward to “new electric sounds, new acoustic interpretations of traditional banjo music and just a whole lot more creativity.”  He encourages others to explore “music beyond their own borders and beyond the radio and TV. There is a gold mine of ear candy awaiting those willing to seek it out. I think music in general is in some good hands.” True to this spirit, Ryan is working on his own new jazz-fusion project called “Back Country to the Future.”  Played on his Deering Legacy and Crossfire banjos, featuring Bill Evans on sax, Mark Egan on bass, and Joel Rosenblatt on drums, the CD will fuse elements from traditional banjo music with forward thinking modern jazz. Those wishing to learn more about this new project or who wish to keep in touch with Ryan may wish to log on to the following links:

Here is the link for the project: http://www.indiegogo.com/Banjo-player-has-vision Find Ryan on Facebook: http://www.facebook.com/rcavanaugh1 Find Ryan on Twitter: https://twitter.com/#!/RyanCbanjo