The first banjos were all open back.  Around the turn of the 20th century, jazz bands with trumpets, trombones, saxophones, tubas, and a bass drum needed a rhythm instrument with more projection.  So, according to some historians, they took the fifth string off of five string banjos, put a reflective cover on the back and over time added tone rings of different weights, shapes and materials.  Thus, the “plectrum” banjo (a banjo strummed with a “plectrum”, what we now call a flat pick) became the standard banjo for the extremely popular jazz music.

Some of these banjos were also made in five string and found their way into the Appalachian mountains where the players enjoyed the same projection in barn dances where the fiddler and the banjo players had to be heard over clogging feet and the laughter of square dancers from around the county.

One of the earliest “power house” banjos was built around the mid 1930’s.   Our Golden Series banjos are a reproduction of this traditional banjo.

The appeal of this design became more accepted because of the popularity of the late great Earl Scruggs.

Ironically, Earl Scruggs played a Vega banjo for many years and many of the classic recordings from the 1940’s were recorded with the Vega “Earl Scruggs Model.”

But Earl found that the heavy cast bronze tone ring in the 1930’s banjos gave him a more “solid” sound and one that projected a bit better than the lighter weight “tubaphone” tone ring in his Vega Earl Scruggs model.

The historic heavy bronze tone ring created a ringing yet “solid” sound that was new in the banjo world.  The beautiful Vega Tubaphone, invented around 1910,  while full bodied and warm in sound, sounds a little “lighter” in intensity when played above the 7th fret.   While a microphone or pickup is used today by most players, there were no microphones for the average musician so sheer acoustic power was very desirable.

How It Was Adapted

The heavier tone ring creates a sound that penetrates through other instruments in a band, but retains a brilliant ringing banjo tone while doing so.  Generally, a heavy cast tone ring in the 2-3 pound weight range, will create a punchy, solid sound that will get louder under the hand of the player without losing punch.

So, the “bluegrass” banjo was originally intended as a jazz banjo, but was adapted to the mountain styles.

More bluegrass players heard the solid, punchy sound of the heavy tone ring and this was the defining characteristic that created the “driving” sound of bluegrass music.  Most historians agree that the five string banjo, fingerpicked with the thumb and two fingers is THE defining phenomenon of bluegrass music.  Guitars, mandolins, fiddles, dobros, and basses all came from other musical genres.  While these other instruments are important parts of bluegrass, they did not define the style like the finger picked five string banjo.

While traditional innovators like Earl Scruggs, Don Reno, Ralph Stanley, and Eddie Adcock, defined the bluegrass banjo, in the 1960‘s and 1970’s there were young players who were expanding the “definition” of five string banjo playing.  Players like Bobby Thompson, Bill Keith, Larry McNeely, and Tony Trischka, and others who were utilizing a “note for note” style of playing the banjo called “melodic” style.

For the new players, the “ideal” banjo, didn’t necessarily have all of the exact sound or playing characteristics desired by the earlier traditional players.

The early five string banjos were adaptations of the popular plectrum banjo so the necks were about one and three sixteenths of an inch at the nut.  Modern players found that a one and one quarter of an inch nut width allowed a little more space for the fingers to get in between strings.   The narrow neck was beautiful for chords and chord melody playing of the plectrum.  The slightly  wider neck is preferred to day by most modern players and even by many traditionalists.

The “modern” banjos which are exemplified by models like the Sierra, Deluxe, Maple Blossom, Calico, GDL ,etc are characterized by features like:

The Heart of Bluegrass 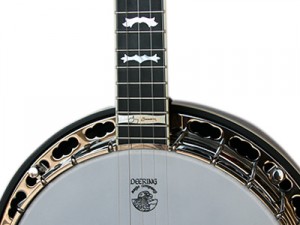 One of the most celebrated “traditional” banjo pickers today is Terry Baucom.   Called the “Duke of Drive” because of his superb, driving bluegrass style, Terry had very specific ideas in mind when we built his Terry Baucom Signature model.   Terry’s picking style is so highly regarded in the traditional bluegrass world, that his approach is considered by many as a new standard of what Bluegrass Music is.   Building a banjo to fit him would mean analyzing and creating “the” bluegrass tone.

This banjo, more than any bluegrass banjo available today, successfully combines the best of traditional banjos with more modern features.

The tone of the Terry Baucom model has been described by other players as the best “Bluegrass Banjo” ever made.   This combination of design and ingredients has captured the “essence” or the “heart” of bluegrass music in the minds of many players.

While there are many great banjoists who are playing bluegrass, popular music, jazz, Celtic and exploring new styles, there are “bluegrass enthusiasts” who are dedicated to preserving the traditional sounds created by Earl Scruggs, Eddie Adcock, and Don Reno who search for that certain traditional “character” in their banjos.

Their descriptions of tone align perfectly with the Terry Baucom model banjo.  The Golden Era has a classic sound with classic feel and playability.  The maple Calico is powerful, versatile and quickly responsive.

But the Terry Baucom model, borrowing from both of these beautiful designs has created a definition of Bluegrass sound that is capturing traditional players around the world.  From Terry Baucom himself to Graham Sharp of the Steep Canyon Rangers, this new “definition of bluegrass banjo sound” is capturing new traditionalists and defining the new traditions in one of America’s great music traditions….Bluegrass.