This week saw the 2020 recipients for the Steve Martin Banjo Prize announced by the FreshGrass Foundation, who partnered earlier this year with Steve Martin to keep this award, which he initially conceived and funded, going forward into the future. This announcement brought five co-winners of this year's prize!

Steve had designed the annual prize of $50,000 to be given annually for ten years to a banjo player of special merit, and had originally called it the Steve Martin Prize for Excellence in Banjo and Bluegrass Music. Now shortened to the Steve Martin Banjo Prize, FreshGrass and other new partner, Compass Music, intend for the award to be given to a wider variety of players in many different styles.

The 2020 Steve Martin Prize winners are:

Jake Blount: Jake is a clawhammer banjoist and scholar specializing in the music of Black and indigenous communities. He highlights the experiences of queer people and people of color in his work, including his latest album, Spider Tales. clawhammer banjo player who focuses on old time music from African Americans.

Catherine “BB” Bowness: Born in New Zealand and trained at the New Zealand School of Music and University of North Carolina, Greensboro, Bowness is a member of Mile Twelve, which won Best New Artist at this year’s International Bluegrass Music Association awards. She is at the forefront of the current crop of young players reimagining the musical possibilities for Scruggs-style 5-string banjo.

Matthew Davis: At 21 years old, Davis is already one of his generation’s premier banjo players and composers, and a member of “chambergrass” band Westbound Situation and progressive bluegrassers Circus No. 9. He won the National Banjo Championship at age 17, studied jazz at University of Michigan, and has enrolled in seminary to train for priesthood.

Buddy Wachter: Widely regarded as the most influential 4-string banjo player of our time, Wachter has played more than 7,000 concerts to audiences in 130 countries and has introduced the instrument to some of the most remote parts of the globe as a cultural ambassador for the U.S. State Department.

Gerry O’Connor: Dublin, Ireland-based O’Connor has brought his unique tenor banjo style to places no other Irish banjo player has tread before, experimenting with elements from bluegrass to African to Asian and back to Irish again, all the while maintaining his signature sound. He has guested and toured with a long list of artists, including Joe Bonamassa, and played on the Lord of the Dance soundtrack.

These five will share this year’s $50,000 award equally, and were featured in a livestream presentation Wednesday evening. Steve Martin introduce the proceedings, which include performances by all five 2020 awardees, Chris Thile, Dom Flemons, and Alison Brown with the Kronos Quartet.

Beginning in 2021, a prize of $25,000 will be awarded to one or more banjo players chosen by the Board of Directors of the Steve Martin Banjo Prize.

Thank you Steve Martin for your incredible gift to the worldwide diverse and talented banjo community! 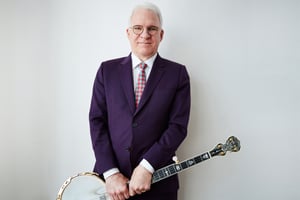 Jens Kruger Inducted Into the Banjo Hall Of Fame

We would like to congratulate our friend and Deering artist Jens Kruger on being inducted into the 2021 American Banjo Museum Hall of Fame in the Five-String...

Mumfords lead the way with a Deering

A little over a year and a half ago, we blogged about the early signs of what we predicted would be a major banjo resurgence, with particular reference to an...

Deering endorsing artist, Tony Trischka has been chosen to receive one of the 50 prestigious...