Mumfords lead the way with a Deering

A little over a year and a half ago, we blogged about the early signs of what we predicted would be a major banjo resurgence, with particular reference to an article about Mumford & Sons that was published in Rolling Stone entitled "God, Beer & Banjos". (Click here to see the original article) There is no denying that in the last couple of years, the banjo has been seemingly unavoidable due in large part to the multitude of different bands using the humble instrument as a core part of a sound that spans a plethora of different genres. But no band has done more to put the banjo firmly back on the music map than Mumford & Sons.

In a year of firsts, Mumford's sophomore effort Babel not only became their first number 1 Billboard 200 entry, but was the biggest selling record of 2012, chalking up over 600,000 sales in its first week.   And despite all the individual talent within the band, it is the banjo that is getting the most attention. Not the guitar, not the upright bass or the piano, but the banjo. Winston Marshall's Deering Eagle II banjo cuts through the mix with ease , driving the bands trademark uptempo sound all the way to the Grammys where on February 10th 2013, Mumford & Sons won Album of the Year for Babel. Yes, you read that right - an album that features the banjo as one of its primary instruments just won the musical equivalent of Olympic Gold! 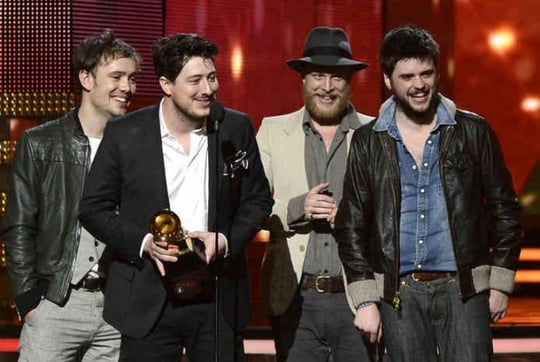 Of course, the banjo has featured on Album of the Year winning records before. In 2007, the Dixie Chicks used banjo, albeit as more of an backing instrument on their album  'Taking The Long Way' which earned the band the same honors. But even the popularity of the Dixie Chicks at the time didn't have as big an impact on banjo resurgence that Mumford & Sons and their peers Avett Brothers, Trampled By Turtles, Dropkick Murphys or Taylor Swift are having on this new generation of players.

Exactly why this is happening is hard to say. Certainly and interest in alternative acoustic instruments in general is a contributing factor. What we do know is that the banjo is now a widely accepted and very 'cool' instrument to play. The rules and traditions of the past are being rewritten to allow players to play any kind of banjo in any kind of style, drawing influences from all corners of the banjo playing community to create their own sound and style. And with this resurgence comes a renewed interest in the traditional forms of banjo playing such as Clawhammer or three finger styles. Indeed, a huge part of Deerings artist roster is made up by unbelievably talented musicians which includes likes of Mark Johnson, Tony Trishka, David Holt, Terry Baucom and Jens Kruger who keep the flames burning bright for traditional banjo music and in turn have inspired newer bands like Carolina Chocolate Drops  to tip their hats to the legends of the past while creating a truly modern sound. We have also seen great success from a perhaps less likely contributor in Steve Martin who after years of using the banjo in his movies and comedy routines stepped outside his comfort zone and took his music on the road with the help of modern bluegrass Grammy winners, Steep Canyon Rangers.

The bottom line here is that it doesn't matter how the banjo is used as long as it is being used. Mumford & Sons show no sign of slowing down and we are so very proud of their achievements, as we are of all of our artists and we will continue to support them in any way we can.

And with that, we would like to congratulate Mumford & Sons on their great success at the Grammys and extend this congratulations to ALL of our artists who continue to follow their dreams and their beliefs to achieve what they want to achieve.

To see all of Deerings 2013 Grammy Nominated artists doing what they do best, click here.