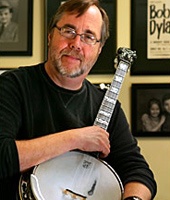 Deering endorsing artist, Tony Trischka has been chosen to receive one of the 50 prestigious $50,000 United States Artist Fellowships for 2012. Tony, one of 7 artists who received a music fellowship, received his award at a celebration held at the Getty Center in Los Angeles on December 2nd . Other fellowships were awarded in dance, literature, theater arts, architecture & design, visual arts, media, and crafts and traditional arts. Tony, who plays a Deering Saratoga Star, is a master banjo player known for his innovative approach to music. USA strives to honor and award an artist’s unique vision as a whole rather than funding a particular project. Clearly, Tony’s overall career falls easily into this mission. He has been nominated and received IBMA’S Banjo Player of the Year Award, has been a noted banjo instructor for decades, and his Academy of Bluegrass website is renowned for its groundbreaking approach to online video instruction.

USA is an independent nonprofit and nongovernmental philanthropic organization based in Los Angeles dedicated to supporting the work of living American artists by granting cash awards, called USA Fellowships. They are granted to artists who have made an impression in their various disciplines. Among the other music recipients was bluegrass singer/songwriter Claire Lynch. The organization’s stated mission is “to invest in America’s finest artists and illuminate the value of artists to society.” Artists must be nominated by at least one group of “nominators” chosen by the organization from a group of arts scholars, critics, and artists from various disciplines. The nominated artist is then notified of their nomination and directed to apply for the grant in order to be considered. Nominees who apply must be 21 or older, a US citizen or legal resident, accomplished in their field and deriving income from their skills and actively engaged in presenting to the public. USA was founded in 2005 with initial seed funding by the Ford Foundation, Rockefeller Foundation, Prudential Foundation and the Rasmussen Foundation.

Deering Banjo Company was founded in 1975 and has grown to become the largest manufacturer of American made banjos in the world. Located in Spring Valley, CA, Deering produces all of its quality 4-string, 5-string, 6-string, and 12-string banjos in the same US facility and boasts the most knowledgeable team in the industry. Deering is proud to have artists such as Tony Trischka, Bela Fleck, Mumford and Sons, Steve Martin, Taylor Swift, Keith Urban, the Avett Brothers, Dropkick Murphys, and many more play their banjos.