One of the easiest and most dramatic changes you can make to your banjo tone is to change where you pick the strings in relation to the bridge. This holds true for all stringed instruments. The closer to the bridge, the brighter yet thinner sound you will get, while the farther away you move from the bridge, the thicker and warmer tone you will have.

When you play different styles of music, take a solo break, or are comping chords, you might want a different tone and thus would move to a different location on the strings for picking your banjo. For example, most traditional bluegrass banjoists prefer a bright, crisp tone when taking a lead break. This allows them to cut through the rest of the band. When these banjoists are playing backup chords though, they will usually move their hand closer to the neck in order to have a warmer tone and blend in more. 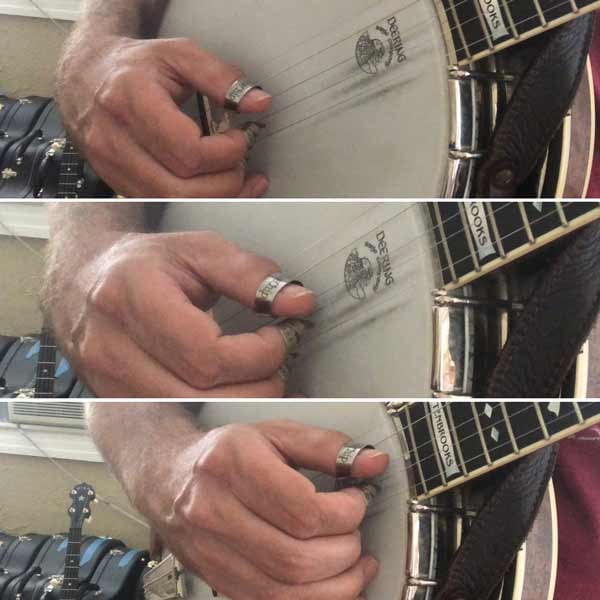 4 string jazz banjoists will change their position often based on the type of song, or if they are picking single notes or strumming chords. There is no hardened rule as to what to do, but again, if they want a bright tone that will cut through, they will play close to the bridge. If they are looking for a fatter, warmer tone, then they will play over the head and closer to the neck.

Again, there are no hardened rules. Try playing in different positions and notice the change in tone. Figure out what musical situations you will want to be playing in specific positions. Go with what your ear tells you to do.

In this beginner 5 string banjo lesson, Jens Kruger slowly talks through and demonstrates what bar chords are, how to play them, and how to use them.  He also...

This is a great lesson for the 5 string banjo from Jens Kruger on how to play the forward roll and incorporate playing the melody into your roll. This is one...

Jens Kruger teaches you how to play basic backup rhythm in the 3 finger style on the 5-string banjo. This is a great lesson to teach some techniques to use...