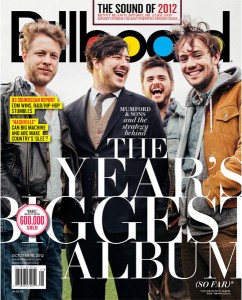 Babel sold over 600,000 copies during its debut week blowing away the previous record held by pop sensation Justin Bieber with his release Believe which sold 374,000 in its first week. We suspect that the lack of a certain five stringed instrument may have hindered Justin's success.

The album comes three years (almost to the day) after their debut release Sigh No More helped bring banjo to the forefront of modern music and is currently #1 on the Billboard 200 charts and also #1 Billboards Rock Albums, Folk Albums, Alternative Albums, and Independent Albums charts!

They are also the cover story on Billboard Magazine.  Read The Story Here