Deering On the Road - Outtakes Part 1

Well it is 11:07pm out here and Deering's first On The Road escapade is in full swing. It started at around 4:55am on Monday morning when a bleary eyed Barry Hunn emerged from his house and climbed into my car to make our way to San Diego International Airport. I was already on coffee number two by that point and feeling excited (probably annoyingly so at that hour) about the few days that lay ahead. Sure its work and there was to be a lot of driving involved, but it is always such a pleasure to visit our dealers and get to know them, as well as the many Deering customers who we hoped would attend.

And that's the funny thing. Since this is our first time doing public events, we had no idea what to expect. Would people show up? Did we do enough to promote? Will the dealer want us back? Is the information we planned to present what they wanted to know? So we simply tried to put our best foot forward, promote as well as we could and look forward to it.

Our flight was due to leave at 6:55am, but United being United (yup, the same United that breaks guitars) had other things in store and we found our flight delayed for over two hours. Having traveled through many airports across the world in my time, I can tell you that there are far worse airports than San Diego to kill time at. Besides, my good friend Mr. Starbucks was close at hand so all was not lost. United made up for it though when they made sure the seat in between Barry and myself was empty and that our bags were among the first onto the carousel once in Chicago. And so we grabbed our bags and with a quick stop via our preferred car rental office, Barry and myself boarded the flight deck of  our trusty 2015 Chrysler Town & Country and were most definitely on the road! First stop? Our good friends at Down Home Guitars in historic Downtown Frankfort, IL.

After battling through the tolls and traffic that enclose the Windy City, we found ourselves on the very charming and very quaint, White Street, with traditional wood panel houses, stand alone mail boxes and autumnal colors that as a British kid, I only knew from the movies. It was quintessential America in my mind at least. Just beautiful. 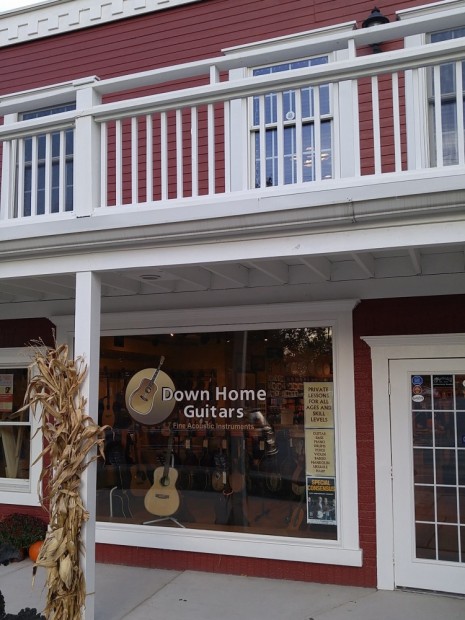 Down Home itself is one of many small independent businesses on this particular stretch of road which makes you feel like you somehow stepped back to a far simpler time. Possibly one where Billboard charts, over processed production and image didn't exist and the only thing that truly mattered in music was the music itself. The 100 year old building that houses the stores was once a trolley barn and lent itself perfectly to Down Homes Americana-esque atmosphere of fine acoustic instruments. 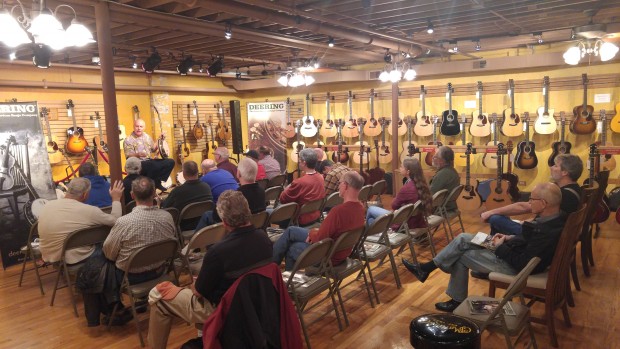 A beautifully laid out, spacious store with a fine selection of guitars, banjos, mandolins and more, Down Home never once felt crowded or over stocked. I got the impression that unlike so many stores, customers could breath in there and didn't feel overwhelmed by choice or sales pressure. They were encouraged to take their time and soak it all in. It was indeed a very fitting venue for Deering's first On The Road Event which in my mind was a great success as over 20 people came out to hear Product Specialist Barry Hunn attempt to squueze over 40 years of banjo knowldge into a little over 90 minutes (which I might add he did a pretty good job of). It really was a real joy to talk to so many people who either owned a Deering or aspired to own one.  An overwhelmingly positive response all round!

Many in the audience, already armed with finger picks, got to try the new 40th Anniversary White Oak model which was praised for its Bluegrass worthy tone and light weight. 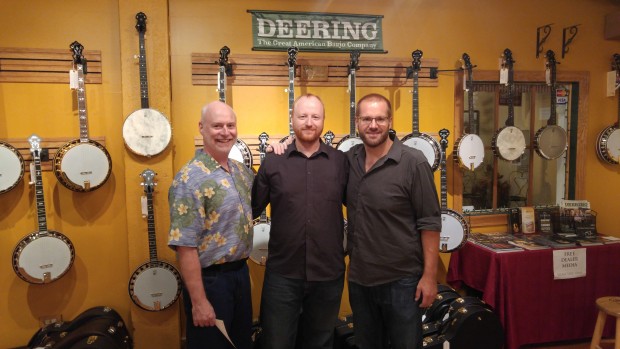 We wrapped up at around 9pm and begun the long drive to Indianapolis. Thrown off by an unexpected time zone change about an hour into Indiana, as well as trying to check into a hotel that didn't really exist (long story for another day) we found ourselves concluding a 19 hour day by finally resting our heads at around 2am. A well earned rest. Even if it was only for 4 hours.

This banjo thing is tough. But someone gotta do it!

P.S. Quick fun fact since we were in Chicago. In the movie (one of my personal favorites) Back To The Future Part 2, the sports almanac that Doc and Marty find predicts that the Cubs will win the World Series in 2015. Now, the Cubs are down 3-0 against the Mets right now. But what if...what if...