Remember those old Hollywood musicals? You know, the ones about “a boy and a girl and a cast of thousands of musicians playing great music”? Believe it or not, that's the story of the Goodtime banjo! It’s Greg and Janet Deering and all of YOU as the cast of thousands who have made up the story of 20 years of Goodtime banjos. But to better understand the story, let’s go back, way back to the beginning…(cue the cameras, start the fog machine, and travel back with me to the start of the adventure).

While the Deering Banjo Company started in 1975 with professional level banjos, it was always Greg's mission to make a great introductory level model that would make it easier for hopeful banjo lovers to learn to play the banjo. The reality of this dream would not happen until 1996.

It was in the heartland of America, Winfield, KS, that Greg and Janet Deering introduced the first openback Goodtime banjo at the Walnut Valley Festival. Handing this light weight, natural finished blonde maple banjo to folks Greg and Janet Deering heard time and again how much they  enjoyed it’s naturally bright tone and light weight. One player commented, “I could have a really good time with this banjo.” And thus the Goodtime banjo got its name! After 20 years, folks are still having a very good time with the most popular quality American made banjo in the world, the Goodtime! 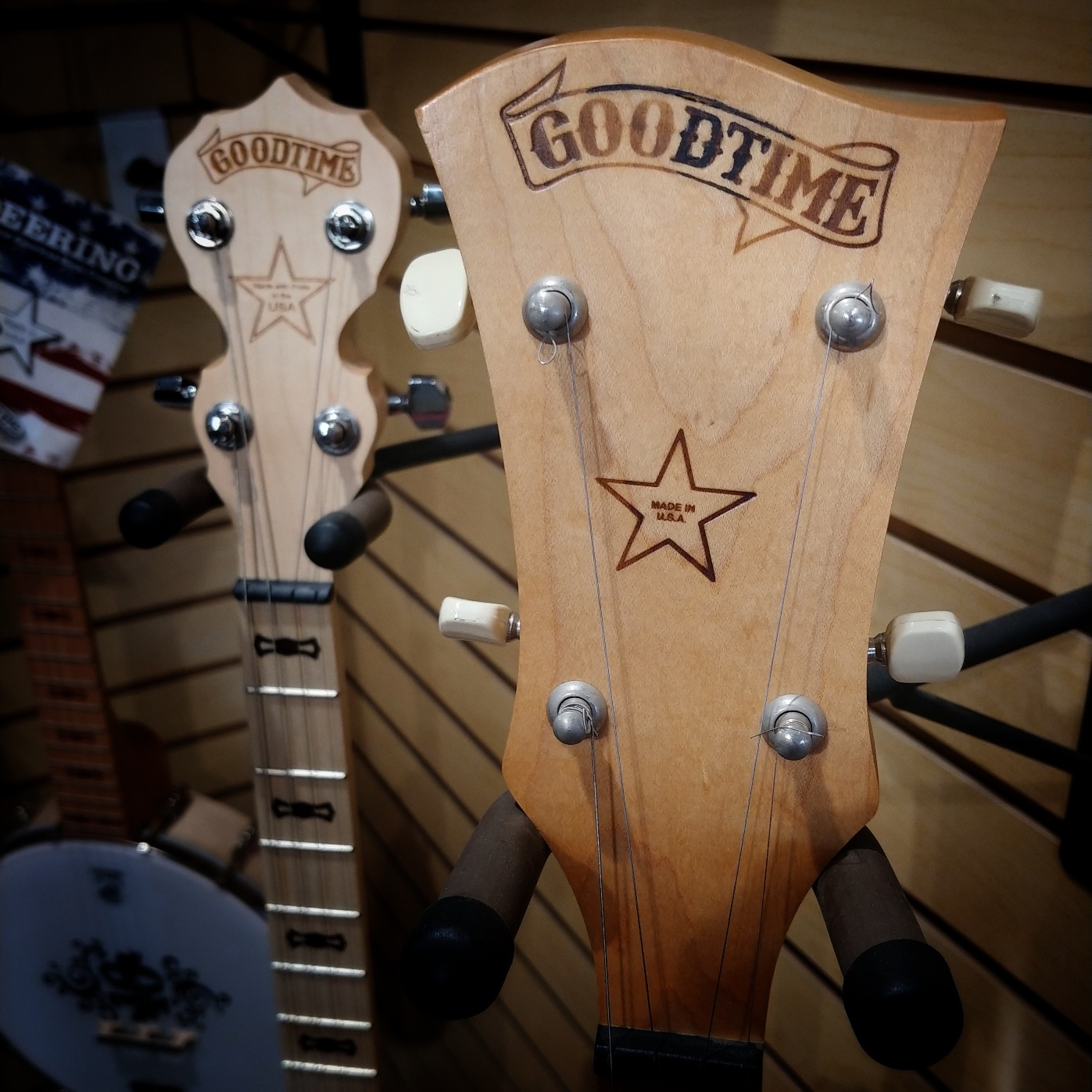 The banjo players themselves have always been the most important “ingredient” in the life of the Goodtime banjos. It was the customer who dubbed the wave shaped peghead profile the “Gumby” peghead, after the little green cartoon character of our childhood. In those days, it came with a mutli-ply birch/maple rim, black dots for fingerboard markers, light gauge strings, top frosted head and open gear tuners with white plastic buttons. Many of you may own a “vintage” Goodtime banjo that looks just like that…I know I do! And it still sounds sweet and plays with ease after many years of playing it.

And it is really because of our customers and Greg Deering’s willingness to answer their wishes that the Goodtime line grew from just the little openback that he planned to now over 45 variations of Goodtime banjos! While today’s natural finish maple models have hardwood bow tie inlays, improved sealed, guitar tuners, and a 3-ply violin grade maple rim, they still have frosted top heads and light gauge strings and carry a sweet, warm, sparkling tone.

The fun never ends with the Goodtime banjo. You asked for something with a more traditional peghead shape and in 2008 not only did Deering offer that but added the new 3-ply violin grade rims to improve the tone to match the new look. In 2009, the Goodtime Midnight Special came into being and today Mean Mary James has shown folks what a wonderful sound this “cool looking” banjo can produce.

With the invention of the Kavanjo banjo pickup and its improvement to amplifying the banjo so that in 2010 even our Goodtime banjo is made with this premium pickup.

Steve Martin loved the Goodtime so much that he asked us to make complimentary banjos for two albums that you may have heard of. The result? The Goodtime Crow banjo and the Goodtime Rare Bird Alert  models (2010-2011). Are you an Apocalypse fan? Then the Goodtime Zombie Killer that was introduced in 2013 is right up your alley. You asked for a 6-string Goodtime banjo and the Goodtime Solana 6 was launched in 2014 along with the new 12” rim Goodtime Americana banjo for the more traditional warmth of folk tunes.

And of course, for all of you ukulele fans out there, the concert and tenor versions of the Goodtime Banjo Ukuele have become exceedingly popular additions.

We have travelled together from the past to the present and we can cue the camera’s lights to bright and beautiful because now Greg and Janet Deering have added the much desired banjo ukulele in both concert and tenor scales. And the Classic Goodtime banjos have given way for the Artisan Goodtime banjos that feature a Midnight Maple™ fingerboard and elaborate white inlays. You asked for it and Deering has always been happy to make it for you.

Here’s to 20 more years of good times together! Thanks for the memories!!