Time flies when you’re rocking up a storm! Sam Ash and Deering Banjos have put together a "pot of gold" at the end of the rainbow for the Dropkick Murphys Anniversary Celebration tour! You have the chance to win this custom Dropkick Murphys Goodtime banjo, with their 20th Anniversary artwork on the banjo drum head, which has been personally signed by members of the band! You can enter to win here http://spotlight.samash.com/contests/ 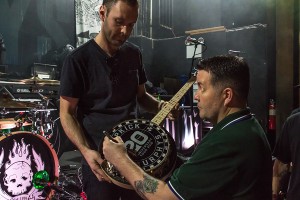 Dropkick Murphys are celebrating their 20 Year Anniversary as an iconic Boston based Celtic punk band.  They kicked off the celebrations February 18th at House Of Blues in Cleveland and will be wrapping it up with the band’s traditional hometown run of Boston shows St. Patrick’s Day week!

"It's been an honor and a privilege to do this band for twenty years,” says Dropkick Murphys’ bassist/vocalist Ken Casey. “Considering the band started on a bet, I'm pretty damn proud of what we've been able to accomplish. After twenty years, we are more grateful and enthusiastic than ever… the best is yet to come!” 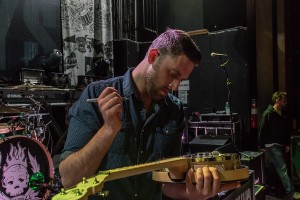 The band, which consists of vocalist Al Barr, singer-bassist Ken Casey, guitarist James Lynch, drummer Matt Kelly and multi-instrumentalists Jeff DaRosa and Tim Brennan, also have a non-profit they are passionate about, The Claddagh Fund founded in 2009 by Ken Casey. Ken, his bandmates and their families have supported charities throughout the history of the band.  Understanding the power of their position to harness the passion and generosity of their fans, the Claddagh Fund was created to raise funds for and broaden their impact on worthy, underfunded non-profits that support the most vulnerable individuals in our communities.

Utilizing a grassroots approach to fundraising, The Claddagh Fund supports community-based non-profits, with a focus on children and veterans organizations and programs that support alcohol and drug rehabilitation in cities across the country and around the world. 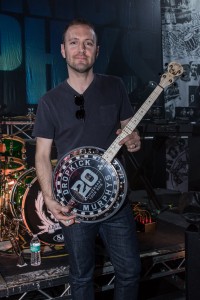 Along with entering to win the custom Dropkick Murphys 20th Anniversary Goodtime banjo, you are given the option to donate to the Claddagh Fund and lend support to many exceptional causes.

20 years ago was also when the Goodtime Banjo was developed and introduced to the world of musical instruments! Now known as the beginner and travel banjo of choice, it has seen many performance stages, beaches and hikes in its lifetime! Deering is honored to have continued to produce this line of banjos in their Spring Valley, California factory and make this affordable, easy to play, and durable line of banjos available for all.