We first met Jonny Mizzone and his brothers at the Newport Festival and again in Nashville at IBMA. The boys stopped folks in the aisles with their fast picking and abundant energy.  Jonny will soon be playing his beautiful Deering Calico banjo.

Best known for their YouTube bedroom practice sessions, the band is composed of 11 year old Jonny Mizzone on banjo, his 14 year old brother Robbie on fiddle, and 15 year old brother Tommy on guitar. With fingers flying and bountiful energy, these young men have captured the attention of over 15 million viewers on YouTube and been seen on TV shows such as  The Late Show with David Letterman, NBC’s Today Show, repeat visits on Fox’s Mike Huckabee Show, Fox Good Day, and Hallmark's Home & Family Show. 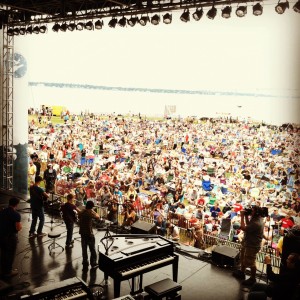 No strangers to the performing stage, the band made their Grand Ole Opry debut with banjo legend J.D. Crow and their first album “America’s Music” was number 8 on Billboard’s Album Chart when it debuted. They were featured on the Ryman Auditorium stage, along with 50 other veteran banjo players including Steve Martin,  in a tribute to the late Earl Scruggs during the latest International Bluegrass Music Association’s convention in Nashville. Their second CD “The Farthest Horizon” is now available through their website.

By way of introduction, their website reads, “The Sleepy Man Banjo Boys are the result of brotherly-love, faith in God, and a passion for inspiring others with their musical gifts.” They put action to words by supporting several charitable organizations.  The Abundant Life International Ministries in Bishop, WV, whose mission is to help families living in this poverty stricken Appalachian region, receive a portion of their merchandise and CD sales. The James Fund, a non-profit organization dedicated to meeting the needs of orphans and widows world-wide received all the proceeds of a special recording of Jingle Bells they made last December. Their CDs are available on iTunes or on their website sleepymanbanjoboys.com

Look for the band on the Grand Ole Opry stage again on Friday April 5th, at Nebraska’s Country Bluegrass Show in late April, at the Southern Cove Bluegrass Festival in PA, California’s Mammoth Festival at the end of August, The Birchmere, and other great venues and festivals throughout 2013. Make an opportunity to see them - you’ll be glad you did!