Can the Banjo Make You a Better Guitar Player? 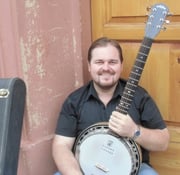 I can confidently say a resounding YES! Since I started playing my Deluxe 6 string banjo, my guitar playing has improved. Since getting it in 2010, I went through a process of learning the subtleties of my new found friend. It was both easy, because the Banjo is so much fun to play, and intense, as I found out that the dynamic range of the banjo is incredibly wide.

My experimenting with it was not just exposing me to the new possibilities that playing the banjo offered me but also, as I later found out, permanently affected how I play the guitar! I found out that I was missing out on so many tonal, and stylistic opportunities playing the guitar the way I did before I started playing the banjo.

Now, when I look at a phrase on the guitar, I don't just see a single melody, but rather a harmonized melody using a parallel note approach. I now play trills, and fills that I never thought of before playing the banjo, and I am getting a much richer sound from my guitar due to taking better advantage of right hand placement, as well as better fret position choices. The range of possibilities that hearing and playing the banjo has opened to me has added a new level of artistic styles that have made my guitar playing sound more like an orchestra instead of just another solo fingerstyle player.

All of those subtle nuances that eluded me before, or that I thought I understood, became abundantly clear and easy to understand making them easier to implement when playing the guitar after playing my Deering for a few hours. I always come away with a new appreciation for how I can add some new dynamic to an arrangement and see it come to life anew thanks to the sounds that come out of the banjo.

Even playing rhythm has taken a new direction in my guitar playing. When I play rhythm now it is much fuller, with a more elaborate percussive sound. I just keep seeing more opportunities when I play my guitar than I did before, and I credit my experience to the banjo to a great extent.

I have also noted that when I play the same arrangements on the banjo that the audience hears a whole new sound and, to one degree, it has almost doubled my performance list as I can play a few songs on my guitar and twenty minutes later pull out my Deering and play the same tune and the audience goes wild.

If you think you could benefit from a fresh perspective in your guitar playing then you seriously need to consider what a great Deering banjo could do for you! You will not be disappointed it will be a great addition to your collection that will not just sit and collect dust.

In this beginner 5 string banjo lesson, Jens Kruger slowly talks through and demonstrates what bar chords are, how to play them, and how to use them.  He also...

This is a great lesson for the 5 string banjo from Jens Kruger on how to play the forward roll and incorporate playing the melody into your roll. This is one...

Jens Kruger teaches you how to play basic backup rhythm in the 3 finger style on the 5-string banjo. This is a great lesson to teach some techniques to use...