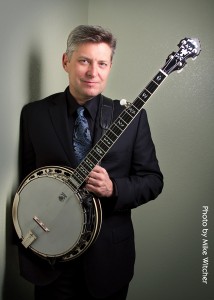 “I always knew banjo was cool. Now lots of people are warming up to that notion.”

How does one go from a dairy farm in Ellensburg Depot, NY in the northern foothills of the Adirondacks to the stage of the Grand Ole’ Opry in Nashville, TN?

“My parents loved music but they didn’t play,” says Eric Gibson. “My father, I think always wanted to play but he worked like mad from the time he was 9 years old. He was a dairy farmer. He’d go to an auction and come back with a fiddle or they ordered a guitar and a banjo through the Sears Roebuck Catalog so we had instruments around the house but nobody knew how to play them.”  When Eric was 12 and his brother Leigh was 11, they came home from school and their Dad said, “There’s a guy giving lessons at Dick’s Country Store and I’d like one of you to play the banjo and one to play guitar.”

Eric chose banjo and Leigh, guitar, and the bluegrass world has been smiling ever since.

Eric plays Deering’s Tenbrooks mahogany Legacy banjo. Why Deering? “Hearing Tony Trischka and Terry Baucom up close with their Deerings a few years ago convinced me I should be playing one. When Janet sent me the Tenbrooks, I couldn’t put it down. It sounded so rich up and down the neck. I felt like I could really drive it when I needed to but I could also play with sensitivity. I feel like I get a lot of different voicings from it,” says Eric. He continues, “Also, I have never done one show where I couldn’t hear every note I played on stage, even in poor monitor situations. I can always hear myself. I have never had that before. It also stays in tune better than any other banjo I have played.”

Learning to play a banjo in a community where “The instrument just wasn’t very prevalent” can be challenging. Eric remembers, “Earl Scruggs knocked me out when I heard the Carnegie Hall album shortly after starting lessons when I was a sixth grader.”

Eric O’Hara was his teacher for about a year and a half. “He told me he had taken me as far as he could and that I had the ability to take it from there,” said Eric.

Singing at their church came at the suggestion of their minister. The brothers have a natural rapport when it comes to choosing songs. “We grew up listening to the same people and seemed to agree about what type of songs we wanted to play and our direction.”

Eric and Leigh were introduced to Flatt and Scruggs by their teacher and caught the “bluegrass bug” but they never actually intended on becoming musicians. Eric muses,

“I either wanted to pitch at Yankee Stadium or play at the Grand Ole Opry and I’ve gotten to do one of those. I always had monster dreams. But each year we got more and more serious about music.” Eric continued, “Music dominates my life, mostly in good ways. Banjo led me to the Bluegrass World, the coolest cult on Earth.”

Eric was a school teacher but by the time the brothers reached their early 20’s the frequent requests for them to play shows and festivals made a decision inevitable.

Eric took a leave of absence from teaching. “It was a hard decision,” he says, “You take the safety net out from under you. We couldn’t have accomplished what we have done if we hadn’t gone into it full bore. To be a good teacher, it has to be your passion, but music is my passion. I always felt pulled by the music. I felt I had to make the choice.”

Asked who, among all the folks he has met along the road, has been most influential in his musical career, Eric says, “I would say that Junior Barber influenced me the most musically. Junior is a great resophonic guitarist (and our bassist Mike Barber’s father). He played in our band for 7 years and taught a couple of green farm boys all about dynamics. He’d say ‘You can’t be hot if you’re never cold.’ He taught us to support the vocals with our instruments and that less is more. We have always been mindful of those early lessons.”

Eric acknowledges the profound effect that the audience has. “We have the most loyal fans you could imagine. They have picked us up on occasions when we really needed it. I think they feel like they know us as people through our songs. They seem to believe in what we are doing. I have had well-known deejays tell me that our fans are the most vocal bluegrass fans they have encountered, always asking for more Gibson Brothers on the air. We are lucky!”

The other members of the Gibson Brothers Band are Mike Barber on bass, Clayton Campbell on fiddle, and Josh Walsh on Mandolin. They have fondly been referred to as “the Gibson Brothers who don’t share the Gibson name.” One has been on board since 1993 and another was trained at the prestigious Berklee College of Music in Boston. But it is the magic combination of all their talents, along with Eric and Leigh, that has lead the band to its current notoriety.

We asked Eric what he saw in the future for banjo. “I think the banjo’s placement in popular music is more prevalent than it has ever been. Mumford and Sons and the Avetts and Steve Martin (all of whom play Deering banjos) are making inroads with the banjo of late. I think that can only help all of us. I always knew the banjo was cool. Now lots of people are warming up to that notion.”