After several years at the Deering Banjo Co, I recently had the pleasure of attending IBMA (International Bluegrass Music Association) in the beautiful city of Raleigh, NC. As someone who has not grown up surrounded by Bluegrass music, this was one big eye opener for me. Here are seven things that I picked up on during my 5 days in Raleigh.

Bluegrass fans are possibly the most loyal fans in music.

Fan loyalty is the first thing I noticed and, frankly I was blown away.

In the big picture of music popularity, Bluegrass is not high in the Spotify play rankings. However, I did come away with the sense that in some ways, the fans like it this way. It is their thing. They are part of a very exclusive club and the joy and satisfaction that they get from it can only be understood by fellow fans. And I get it. there is something very satisfying to know that the thing that brings you so much joy is only known by a select few dedicated folk.

In my 15 years in the musical instruments industry as well as countless more as a fan and a musician, I have seen my fair share of live music and fan dedication. What I saw at IBMA was nothing short of ravenous, in the most wonderful way possible.

Jamming is part of the culture and it is everywhere!

Of all the things I witnessed throughout the week, the jams were arguably the most important and most impressive. Jams would break out almost spontaneously. Literally anytime, anywhere, anyone. In hallways, in hotel lobby's, in the street, in the stairwell of the convention center. It was fantastic!

At one point I took the elevator down to the ground floor. As we stopped on the 3rd floor and the doors opened, I caught sight of an upright bass and a guitar player, with several other musicians (presumably out of sight down the hall) deep in the throws of a fast paced jam. The doors closed and admittedly, I had to take a minute to reflect on what I just saw. You can't help but smile. 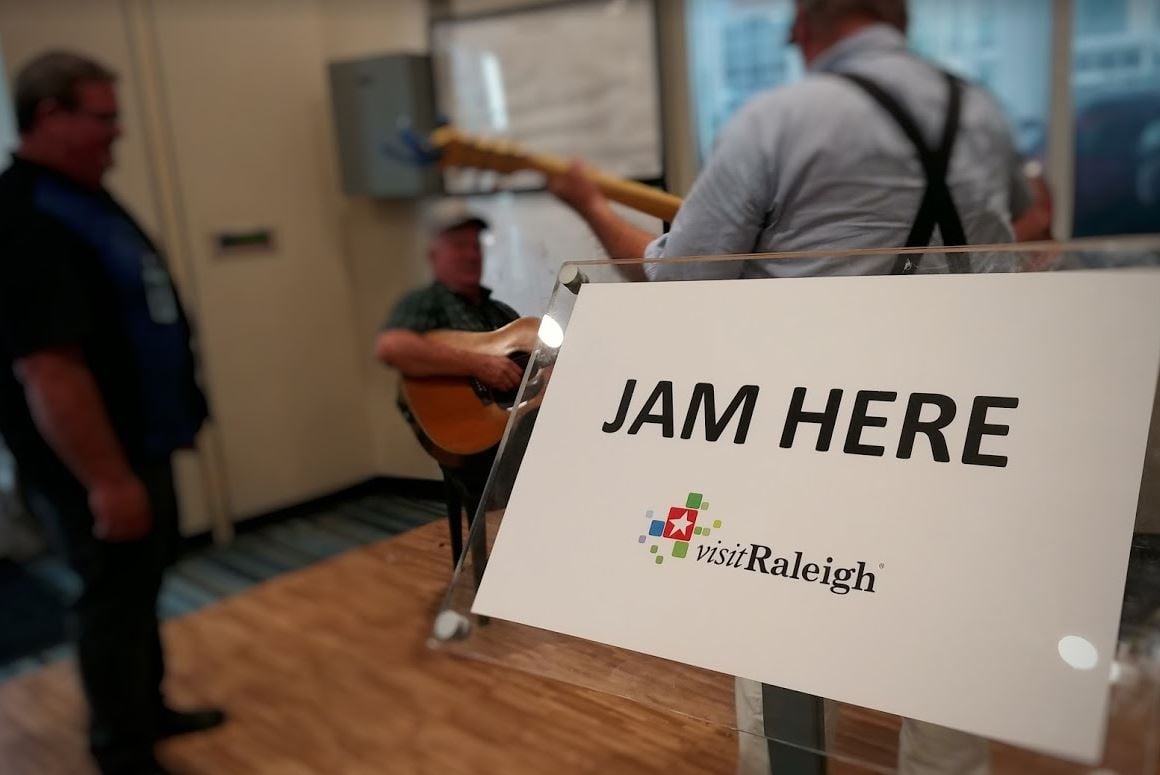 As I checked out of my hotel at 4am on the Sunday to catch my flight, I walked through the lobby of the Marriot, bleary eyed and in need of coffee, to witness the most hardcore of jam fans still going strong, mostly in the same spots they were when I left the lobby just a few hours beforehand!

I can safely say that I don't think that I have ever seen this in any other genre. You certainly wouldn’t find this in rock music. Aside from the challenge of setting up their instruments, amps, drum kits etc, I truly believe that ego would get in the way. In contrast, there simply wasn’t any ego to be found. I am sure if I looked hard enough, I would have found some inside the Bluegrass community. But from my vantage point, it became clear that everyone just wanted to jam, have fun and offer advice for those who were still learning.

It is worth noting that this was also the only time I have ever checked into a hotel and had to sign off a waiver that told me if I was being put in a room on a "jamming floor" or not. I was not, but I hear that sleeping is not an option if you are.

Kicking off the Special Awards ceremony on the Friday of IBMA week, Jerry Douglas opened his remarks by reminding everyone in the room that the heroes of Bluegrass are arguably the most accessible in all of music. It is something that should be appreciated. And he is right. This much, I already knew from my time at Deering. After meeting players like Tony Trischka, Greg Cahill, Alison Brown and many more, it becomes very clear just how genuine and grounded they are.

IBMA is no exception. It is not uncommon to see bluegrass's highest ranks sitting in on jams, or simply dropping into the many booths in the exhibit hall. You just wouldn't see this in the rock or pop world.

Bumping into and shaking hands with mandolin legend, Ricky Skaggs in Starbucks on Friday morning, highlighted this beautifully for me. Less than 24 hours earlier, Ricky had been inducted into the IBMA Bluegrass Hall of Fame at a wonderful awards ceremony at the Duke Energy Center for the Performing Arts. Yet despite the fanfare and applause of the previous evening, he accepted my greeting and congratulations in the same way an old friend would, before spending time with fellow pickers in the hotel lobby. Truly gracious and humble. This particular point leads beautifully into my next observation, which is that...

...Veteran players are always looking to pass on the flame.

On the last night, I was in a bar with our very own John "Kavanjo" Kavanaugh, talking with some fellow attendees. One attendee in particular was also here for the first time. She had driven down from Canada and I asked her what her highlights were for the week. Her response surprised me. It wasn't the blisteringly fast skill of the musicians, or the awesome setting. It was a story that she told of seeing a young girl singing her heart out, alongside Rhonda Vincent. Yes, that Rhonda Vincent.

The lady in question spoke so fondly that Ms. Vincent would give up her time. She seemed genuinely touched by the notion that a lady who was effectively a megastar in these circles, wanted to help pass the flame to the next generation. In a very public fashion.

I witnessed similar gestures in the Deering booth all weekend. As jams broke out, there was always the underlying theme of younger players wanting to learn and older generations more than willing to pass on their wisdom, all in the name of preserving this art form that they so adore, for generations to come.

At 5:55pm on Friday evening, after the exhibit hall was closing its doors, I was approached by a young family band called Mountain Highway – a family band from Virginia, led by Dad, Joe Glover on upright bass. Beside him, his four young children made up the banjo/fiddle/mandolin/guitar combo, playing with more skill, feel and confidence than many adults I know.

Long story short, they are now proudly including a Deering Sierra in their sound. I had the pleasure of seeing them perform that night in the California Room (a suite that is taken over for the week by the California Bluegrass Association and set up as a showcase for upcoming performers).

And they weren't alone. There were many youngsters, on a variety of instruments all weekend, quite literally tearing it up with an unrivaled confidence and skill. 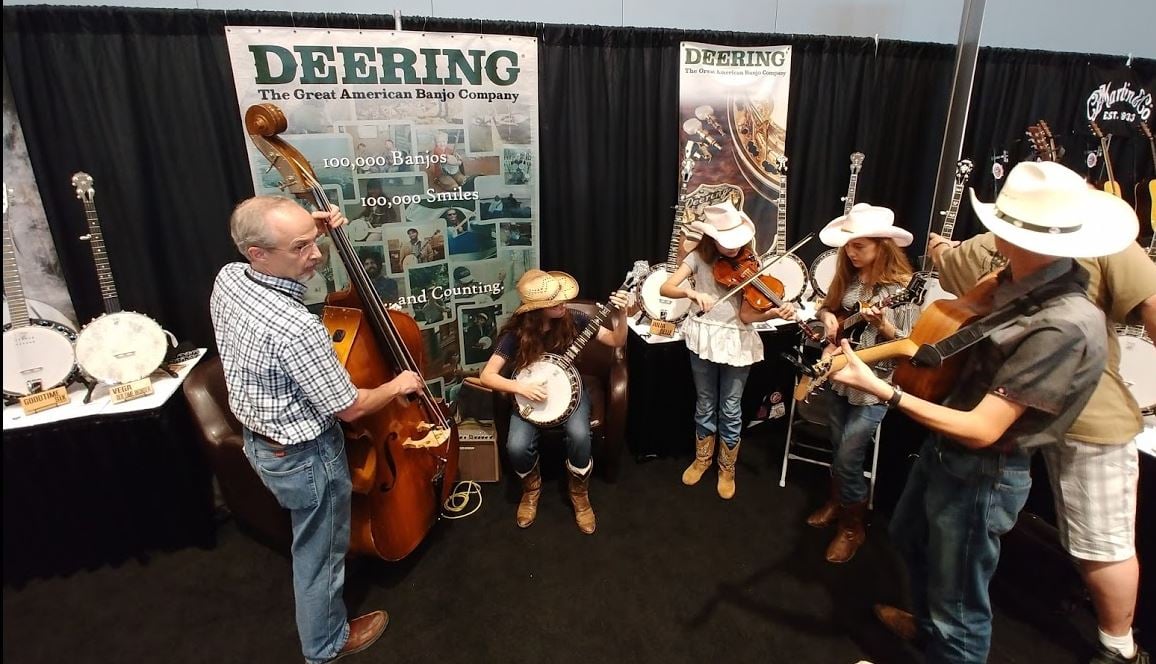 Bluegrass is a community.

One thing that I have always understood about the Bluegrass community, is that it is just that; a community.

IBMA set up the Bluegrass Trust Fund in 1987, as a way to raise funds to help bluegrass music professionals in times of emergency need. IBMA World of Bluegrass week actually began as, and still is, the major fundraising means to keep this Trust Fund going for future generations.

Just days prior to IBMA, Hurricane Florence ripped through the East coast and the Carolina’s were hit hard. Thankfully, Raleigh itself suffered minimal damage, but that didn’t alter the overwhelming sense of community that underscored the entire weekend, especially in the wake of such a tragedy.

It seemed fitting then, that the IBMA Board decided that the Martin Guitar graciously donated by CF Martin each year to be auctioned off for the Trust Fund, instead was auctioned to benefit those in the Carolina's affected by Hurricane Florence. It is not only the players and fans that contribute to the community. The industry publishers, manufactures, labels and more are just as passionate and involved.

In a time where it is all too easy to feel like the country is being torn apart, IBMA and the bluegrass die hards proved to be nothing but united in their quest to help in times of struggle. 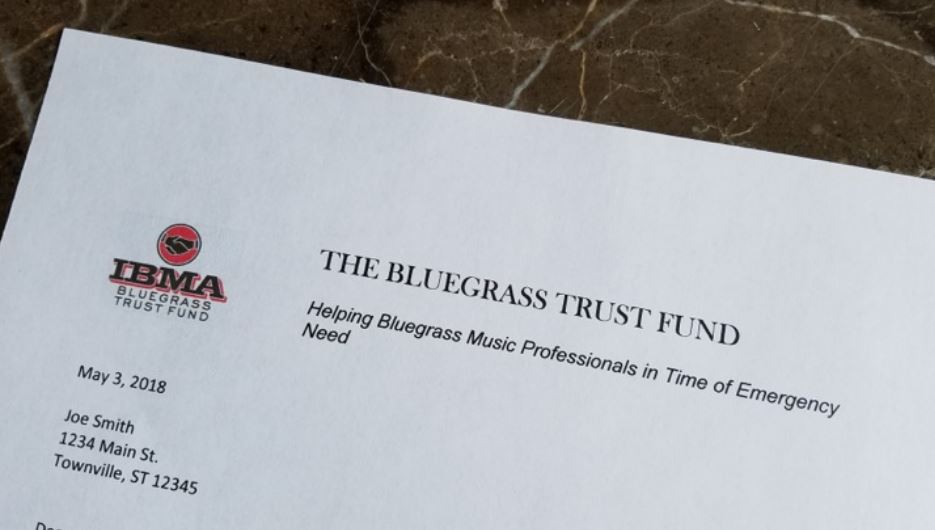 In talking to people who have been long time IBMA attendees, it appears that there was indeed a time where perhaps Bluegrass was not as inclusive as it is today. Indeed, I heard during the course of the weekend, multiple calls for IBMA to take some kind of action to combat what was thought to be a serious problem. Except, at least in my eyes, there really didn’t appear to be too much of a problem at all.

In fact, I was very fortunate to have met an incredibly diverse group of people over the course of IBMA. Musicians and fans alike flocked in all shapes, sizes, genders, races, religions, ethnic backgrounds, and sexual orientation. It was glorious to see, but perhaps even more so because they were only there for one reason. The music. And music, as we know has a very strong history of uniting people. Not dividing.

Is there room for improvement? Absolutely. Although from what I saw, it is just a matter of time.

Last but not least.

If you can, I fully encourage you to come to IBMA 2019. Even if you are not the biggest bluegrass fan in the world, I promise you you will have a fantastic time. This year, IBMA announced that it will be staying in Raleigh, NC through 2021! And it should. A wonderful, rapidly growing city that lends itself beautifully as the backdrop for this incredible event.

I leave you with one of my own personal highlights. Watching the Kruger Brothers on the Davies St. Stage on Friday night, they played their song, "Carolina in the Fall" to an enormous crowd. The first chorus came in...

Is the color of the leaves in Carolina in the Fall

Those four words "Carolina In The Fall" were enough to prompt the entire crowd to erupt with applause and cheer. A remarkable sense of what music is truly about and a moment that summed up the whole week!

See you next year, Raleigh.

P.S. As if you need anymore entertainment, a really fun game to play at IBMA is "Guess the BPM". Just download a metronome app onto your phone that has a tap BPM feature. Have your friends guess the BPM and then tap along to the tune to reveal your answer!