how to play the banjo Melodic Style

What is Melodic Style Banjo?

Melodic style banjo is a style of 3 finger 5 string banjo playing that was created in the early 1960’s by banjoists such as Bill Keith and Bobby Thompson so that they could play note for note fiddle melodies. While Scruggs style is the most popular style of playing the 5 string banjo and gives great drive to bluegrass playing, this style does have its limitations. Mainly that you cannot play melodies note for note that are very intricate such as fiddle tunes.

Banjoists such as Bill Keith and Bobby Thompson sought to solve this problem by creating a style of playing which was later called the “Melodic Style” or sometimes the “Keith Style”. In this style, you rarely play 2 notes one after the other on the same string. You also go up the neck, but utilize open strings in order to create a very legato sound. This contrasts with the way the Reno or Single String style sought to play fiddle melodies, where you often play successive notes on the same string, rarely use open strings, and then end result is a more staccato tone.

Below is an example of how to play a G scale using the melodic style. Notice how the same string is not played twice in a row and the use of the open strings. 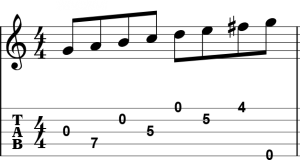 Here is the tab for beginning of the popular fiddle tune Blackberry Blossom. Again notice how the same string is not played twice in succession and the use of the open strings even when playing way up the neck of the banjo.

Below is the same passage from Blackberry Blossom played in the single string style. Here you can notice the difference with the melodic style in that regularly play successive notes on the same string and rarely use open strings - a stark contrast to the melodic style. It is much more difficult to play in this style quickly and with a fluid, legato feel.

While the melodic style really lets you play smoothly and quickly intricate note for note melodies, it is much more difficult to improvise in this style as many melodies and licks need to be worked out. The single string style is much easier to improvise on the fly. Neither of these two styles have the drive and power that the Scruggs styles does. I feel the best playing happens when you can seamlessly merge all of these styles in order to get the benefits of each.

It's OK to Strum the 5-String Banjo

It's OK to Strum the 5-String Banjo

It is ok to strum the banjo. I know this statement seems like a “given” but I have spoken with many folks who feel...