Deering endorsing artist, Terry Baucom, is currently on  tour in Japan along with his wife Cindy.  Music has a world-wide appeal and Terry's "Duke of Drive" style has been well received.  Cindy Baucom, who is a well-known radio personality, sent us these pictures and comments from Terry's recent concert in Japan.

Reaction to Terry's playing from the Japanese is incredible. Many music fans are bringing memorabilia for autographs they have collected over the years (magazines,pictures,albums) some dating back to the mid 70's! Even though the language barrier sometimes makes it difficult to communicate, everyone is so friendly and appreciative of being able to enjoy bluegrass in person.

One of the sold out shows was sponsored by the Asakura Bluegrass Club. They invited all banjo players there to come on stage and perform (uniquely) together.

We are having a wonderful time and will return to North Carolina just in time to join Deering Banjos at Merlefest! 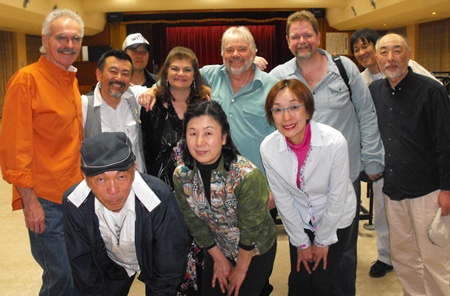