His concerns caused me to realize that there are some misconceptions about ball end strings and loop end strings that need to be addressed. 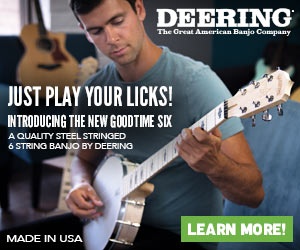 The Wire is the Same

Music wire that is made of steel, is a specific formula and while alloys can vary a little, the alloys are generally not the determining factor between a guitar string, a banjo string, or a piano string.

Generally, one brand of guitar string that also makes banjo strings will use the same wire in both. The wire might be slightly different alloy, tensile strength etc. than another brand of strings, but not within the same brand generally speaking.

What Is the Difference?

Compared to many other stringed instruments, banjo strings tend to be a bit thinner or of a lighter gauge. For example, an acoustic guitar set that is called “light gauge” will commonly have a first string that is .012” of an inch and a sixth string that is .052” of an inch.

Both of these sets are considered “light” and while manufacturers have various gauges that they consider to be light or medium, you can see the banjo strings are much lighter, or thinner, than guitar strings.

Because a banjo head is a thin membrane (typical plastic head is made of .010” mylar sometimes with a coating sprayed on the head) it responds differently to a string plucking than an acoustic guitar top that has a spruce would top that is a full .10” thick. Plus, there are spruce braces glued to the underside of the guitar top to make it stiffer and direct vibration etc.

As an example, pianos, mountain dulcimers, hammered dulcimers, bouzouki’s, mandolins, mandocellos, or mandolas all use loop end strings, but none of them sound anything like a banjo.

My customer who was concerned about the Goodtime Six banjo said that it was easier to find loop end strings than it was to find ball and strings for banjos.

The interesting thing here is that the market for guitars is a much, much larger market than the market for banjos and so the availability of ball end strings in any form is universally more readily available.

It is certainly possible that my customer lives in an area where banjos were more popular and the availability of sets of banjo strings was very prominent.

Realistically however, other than greater availability, there is really no advantage to either system.

Will the new Goodtime Six work with loop end strings?

The tailpiece has six notches for the ball end of the string to catch and hold the end of the string. In between the notches are five narrow “protrusions” that are perfectly adaptable to hold the loop of a loop end string. Since there are only five of these protrusions, it is very common to loop the first and second string over a single stud or protrusion. This new tailpiece is plenty strong enough to handle this and is a design feature to accommodate virtually any type of string.

Deering makes more banjo models and styles and designs than any banjo maker in the world. If there was ever a a single standard of sound or that is to say, if a banjo was supposed to “sound like this” or “sound like that”, we would have found it by now.

Every artist, both professional and nonprofessional, develops ideas of what sound they wish to create. Between the myriad of styles of banjo playing, there are so many definitions of what is beautiful that we have found it is better to build many designs and encourage as much individual uniqueness as we can. As listeners, we all benefit from these many beautiful voices.

Ironically, a very easy way to accomplish that on the six string banjo is to use electric guitar strings that start with the first string of .009”. These have wonderful sparkle on a banjo and do not get very thick on the sixth string.

But, this was just an assumption on my part.

Make It Your Own

Every famous artist who played the banjo has developed their own approach both in musical technique, choice of the banjo and choice of tools like picks, strings, etc. Whether it was a four string plectrum, four string tenor, five string open back, five string resonator, six string, or 12 string banjo, every artist develops a feel for what they are trying to accomplish. The late, great John Hartford once commented in an interview something to the effect of “… If I could only get what’s in my head out of my instruments…”

Every artist searches to find the core of who they are in their art. The new good time Goodtime Six banjo is a wonderful tool for any musician to search for their music.

Make it your own. That’s what we all want to hear. The core of you.

This is the rebroadcast of the 8th episode of our series Deering Tech Live. In this week's episode,  something a little different. Greg Deering, the cofounder...

This is the rebroadcast of the 7th episode of our series Deering Tech Live. In this week's episode, Chad Kopotic, the VP of Operations at Deering talks about

This is the rebroadcast of the 6th episode of our series Deering Tech Live. In this week's episode, Chad Kopotic, the VP of Operations at Deering talks about...

This is the rebroadcast of the 5th episode of our series Deering Tech Live. In this week's episode, Chad Kopotic, the VP of Operations at Deering talks about...