What Does a Banjo Tone Ring Do?

It is generally accepted that the first banjos were constructed without a tone ring. They were built with a round rim made of wood with a skin head (just like a drum head) stretched over the round, wood rim. Early banjo builders discovered stretching the head over a metal ring that was mounted on the wood rim gave the banjo a little more clarity, note separation, a bit more midrange definition, along with increased brightness and even a little more low frequency clarity.

The tone ring is aptly described because it changes the basic tone character of a banjo. In general, a banjo with no tone ring that has a three ply maple rim has a warm, sweet rich midrange sound. This is enjoyed by many traditionalists who like to play old time music and re-create music from the 1800's etc. Clawhammer banjo players in particular, enjoy banjos without a ring mounted to the top of the rim of the banjo.

Banjos with tone rings are often preferred by fingerpickers and some clawhammer players because of the increased brightness, sustain of the notes, and the lively response. The tone ring’s effect on the sound varies with both the design of the tone ring and what material is used in the construction of the tone ring.

Tone rings have been made of steel, brass, bell bronze, and exotic hardwoods like Grenadillo (Gren-uh-dee-yo).

Brass: again very bright, with more warmth than steel. Capable of a very rich sound and can be tuned up to be a bright, crisp sound. (Used in the Deering Eagle II banjo Twenty-Ten™ tone ring, tubaphone tone rings, and others.)

Grenadillo: dark tone with less sustain than any of the metal tone rings. Creates a more pronounced midrange emphasis with less brightness. (Used in the Deering John Hartford model and David Holt banjos) 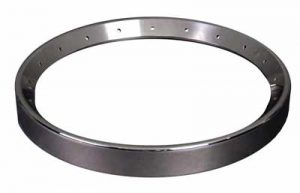 The shape, rigidity and general weight of a tone ring is part of what creates “the” sound of the banjo. Because Deering makes so many different tone rings, they are excellent examples of the combination of design and material for the purposes of defining the function of a tone ring.

For example: the bell bronze Deering -06- tone ring has a triangular cross section. This makes the tone ring very stiff or rigid. This rigidity when combined with the bell bronze alloy creates some very prominent midrange frequency emphasis which musically makes the banjo feel that it has a lot of “punch” to the tone. This punch is considered very desirable by fingerpicking bluegrass players and by some Irish and jazz players as well.

The brass Deering Twenty-Ten™ tone ring is more like a gigantic wedding band. This flat sided design, while weighing about the same as the Deering -06-, has more flexibility. It is not as rigid as the triangular cross section design of the -06-. While this tone ring has great brightness, it has a more even or flat midrange. Yet, because of its weight, it has similar sustain to the -06- tone ring.. Chosen by many fingerpicking banjoists, the smooth, even midrange is also popular with some clawhammer players, 4 string jazz players, melodic fingerstyle players, and pop music banjo players.

The brass tubaphone tone ring (invented by the Vega banjo company in the early 1900s) is a unique design in the banjo world. Though it is made of brass, it is not extremely heavy. Plus, it is constructed in three pieces: a brass rod, a brass sleeve, and a square brass tube. This has been the banjo tone ring of choice for plectrum and tenor banjo players who are playing jazz and many old time clawhammer players. The brass brightness is subdued by the lighter weight and flexibility of this tone ring. It is usually characterized as a more hollow sound with moderate brightness and moderate sustain.

The Grenadillo tone ring is made from blocks of wood carefully fitted and glued to the top of the three ply maple rim. Greg Deering designed this tone ring for the late, great, John Hartford.  This is the same tone ring chosen by the great David Holt for his signature model. Because the Grenadillo is harder than the maple rim, but not as hard as metal, it does make the banjo brighter with more midrange clarity than a no tone ring wood rim banjo.

Overall, a bell metal tone ring adds clarity to a banjo tone. I’ve heard it described as creating a photograph where all of the lines and shades are very precise as opposed to a slightly soft focus.

It is this precision clarity that interests banjo players to buy a banjo with the tone ring. Many players who prefer a more “old fashioned” kind of banjo tone will deliberately buy a banjo with no tone ring. This is very much in keeping with the original banjos from the 1800s.

The weight, stiffness, and metal hardness all affect what kind of sound the tone ring creates.

In fact, the weight that many musicians associate with banjos comes from the tone ring primarily. The resonator, that some players assume adds weight is relatively light and is not the source of a banjo’ s heavyweight.

Some rules of thumb are: harder and stiffer the tone ring, the brighter the sound. The softer and more flexible - the warmer the tone. The heavier the tone ring the longer the sustain of the notes.

When we receive a call from a customer who is interested in “old time banjo” this raises a few questions. Does "old time banjo” mean pre-Civil War? Does it...

One question I hear a lot is "what is a banjitar?" While I have dedicated years pointing out that in fact it is called a 6 string banjo, many folks dismiss the...

7 Reasons Why Banjos Are Good For Your Health

If I told you that banjos were good for your health what would you say? We are told today that a return to the use of natural/organic products is good for our...

The Four Essential 5-String Banjo Rolls
How Hard Is It To Play the Banjo
10 Beginner Bluegrass Banjo Songs
Ukulele Sizes – Soprano, Concert, Tenor & Baritone
How To Play Dueling Banjos On the Banjo