Is the Banjitar a Real Banjo?

"Is the banjitar a real banjo?” has been a much loved subject of music forums and comment sections the world over. Did I say banjitar? I meant Guitjo. Excuse me...I obviously meant Ganjo... Clearly, even knowing what to call the instrument is a quandary for folks!

Whatever you call it, (Deering calls it a 6 string banjo) we can probably all agree that one thing is true. The 6 string banjo gets a bad rap; the black sheep of the banjo family, forced to forever play second fiddle to its more popular and seemingly more appreciated 5 stringed sibling. But why? What did the 6 string banjo do to offend so many people?

I recently found myself sifting through comments that had been left on a Youtube video, made by a young man from the UK. While clearly a phenomenal musician in his own right, this gentleman has built a very prominent presence on social media by playing a multitude of famous riffs and songs on a variety of different instruments. In this particular case, he played no less than 100 popular guitar riffs on a 6 string banjo. It is a very slick, very entertaining video and all in the name of good fun.

And yet as I scrolled down, I couldn't help but feel frustrated at the vast majority of negative comments aimed at his weapon of choice. Comments loaded with suggestions that this obviously accomplished guitar player was somehow cheating or not playing a real banjo, simply because of its string orientation. What was perhaps even more surprising was the shared and very adamant idea among many users that if it isn't a 5 string, then it isn't a banjo. Period. 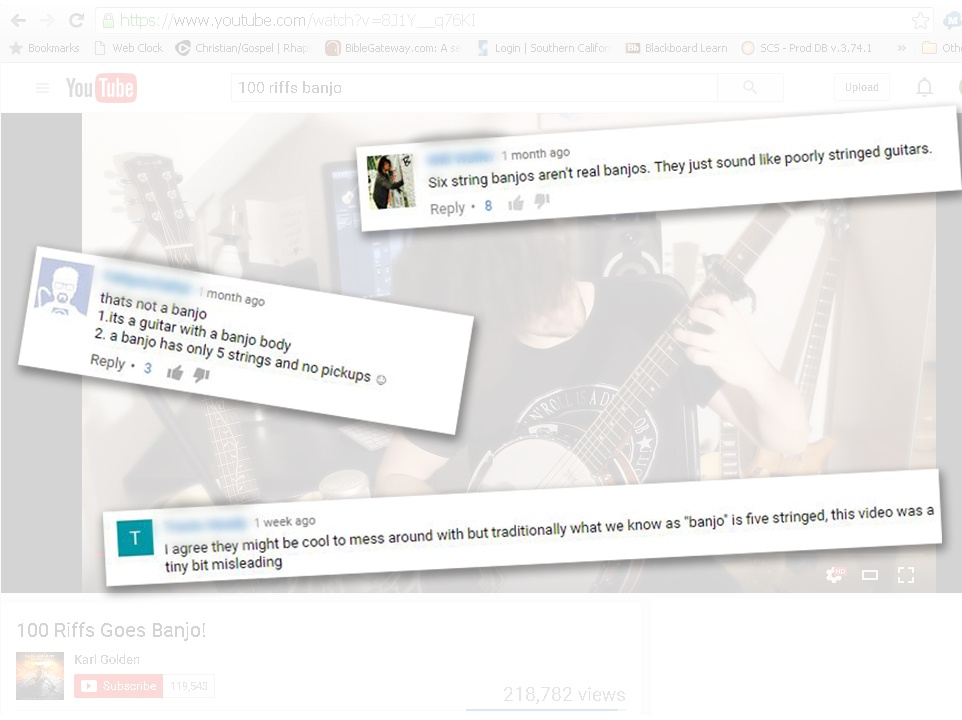 ou can probably guess by now that I have a slightly different take on this.

But before we go any further, it is vital to make one thing clear from the outset. The 6 string banjo is NOT a new idea. Deering didn't invent it and neither did any of today's modern manufacturers. It is also not a modern marketing gimmick. It is a bonafide, genuine instrument with a rich and interesting history, rooted in jazz and dixieland, that is well worth the read.

What makes a banjo a banjo?

In my mind and to many others, the argument of whether a 6 string banjo is a real banjo or not can be very easily resolved by looking at what makes a banjo a banjo in the first place.

For the sake of readers who are a little less familiar with this American icon, a banjo is a banjo thanks to the concept of a membrane (the skin or head) being stretched over a frame (the rim). A banjo is, in its crudest form, a drum with a neck and strings. This approach, as opposed to the hollow wooden box concept of the guitar, is what makes a banjo a banjo. So would it not be true that in the context of the 6 string, there is a strong argument to be made that yes, in fact it is a real banjo?

This argument is taken a few steps further when we look deeper into the realm of the banjo, specifically at tenor and plectrum 4 string banjos. Both have been a huge part of the history of popular music in America, with the jazz world again taking both styles under its wing, often alongside the 6 string. The tenor in particular is tuned like a mandola or viola. And yet I never hear cries of “that’s not a banjo! It's a viola!” or that's just for mandola players who can't be bothered to learn a real banjo”. It just doesn't happen.

So why then, despite its history is the 6 string banjo so quick to be shunned by so many? It is probably worth looking at a couple of points, namely familiarity and popularity. The two go hand in hand somewhat, but let's take a look.

Of all the fretted stringed instruments, guitar without question is the most popular, both in its acoustic and electric form. Since the advent of amplification, the guitar has become the worldwide instrument of choice. It oozes cool and is supported by an all star cast of guitar heroes gracing the stages of stadium sized venues 300 nights a year to crowds of thousands upon thousands of fans world over. The result is a fiercely loyal fan base whose only exposure to a 6 string instrument is a through a guitar. Anything else could very understandably be deemed to be an imposter!

Furthermore, within the banjo world itself, the 5 string is by far and away the popular choice. It is by no means the only style of banjo. But it would seem reasonable to assume that most people who have held or played a banjo in their lifetime are referring to a 5 string banjo. So for the inexperienced, again there is a degree of understanding why some might see the 5 string as the “real deal”.

Familiarity plays a role too. The tenor/viola argument is truly valid. But you don't see many playing a tenor banjo with a bow, like a viola. Nor do you see too many violas being flat picked (although either of these scenarios would make for a very interesting spectacle, don't you think?). The 6 string banjo on the other hand can be and often is played in the exact same way as a guitar. Fingerpicking. Flatpicking. Strumming. Power Chords. Blues. Rockabilly. Punk. Flamenco. Jazz. Metal. You name it. It is played the same way. I can't help but wonder how much this plays into the forming of these seemingly negative opinions.

A source of creativity

Fast forward 90 plus years from its humble roots in jazz and the 6 string banjo is available in many shapes, sizes, prices, bells and whistles. The player? Overwhelmingly guitarists. Country. Rock. Pop. Folk. It has been embraced, although still nowhere close to the level of 5 string popularity, by a host of guitar players and multi instrumentalists. Not as an “easy” approach to playing what too many deem to be “real” banjo, but as a way to be creative. To be inspired.

Whether it be the stadium country rock of Eric Church to the lesser known but phenomenal playing of Buddy Tetreault, one thing you will notice, none of these players are replacing their guitars with a 6 string banjo. It is simply an addition to their arsenal.

The 6 string banjo affords guitar players the chance to play what they already know with unimaginably different results. And while there is something very fun and oddly satisfying about playing the intro to Stairway to Heaven, Back in Black, or any number of Brian Setzer tunes, it is the creativity element that fascinates me.

Guitarists who experiment with different tunings or effects pedals will attest to the fact that often times, these subtle changes can dramatically alter the direction of the music being created. It takes the player in a different direction to what was originally intended.

Imagine that you are a chef and every single time you go to the kitchen, the same ingredients are there. Chicken. Onion. Mushroom. Carrots. Green beans. Salt. Pepper. Garlic (I don't know what I am cooking at this point. Doesn’t sound too exciting though). If all you keep are the same ingredients then it is inevitable that at some point you will become uninspired about what to cook. Chances are that you will begin repeating recipes that worked. Now, what if you also had some beautiful herbs, spices, fresh produce, eggs. Some flour and yeast to make fresh bread. Suddenly you can start getting a little more creative.

You see the banjitar is merely an extension of what the guitar player already knows. Although the 6 strings tuned E-E are familiar, it feels different. It sounds different. It can be played differently or it can be played the same, but one thing is for sure, it unleashes another area of creativity that may not have come by sticking to the same ingredients.

So, is the Banjitar a Real Banjo?

It is okay for you to agree or disagree with any of the thoughts laid out in this article, but with regards to whether or not the 6 string banjo is a real banjo, my answer is a firm yes. Just like a tenor or a plectrum banjo are real banjos. And while I can understand somewhat why many see it as an imposter in the banjo world, is it really cheating? Absolutely not. Should it replace the guitar? No.

All I can say is don't discount it right away. Try it out, if you already play guitar. For some, it might just be that extra ingredient that you were looking for. For others, it will likely just be outright fun trying to navigate a complex sweep picking section, or play something completely unorthodox to the norm.

If all else fails, just play your licks. I promise it will put a smile on your face. Just like a real banjo should.

The Four Essential 5-String Banjo Rolls
How Hard Is It To Play the Banjo
10 Beginner Bluegrass Banjo Songs
Ukulele Sizes – Soprano, Concert, Tenor & Baritone
How To Play Dueling Banjos On the Banjo