Danny Barker and the 6-String Banjo In New Orleans Jazz 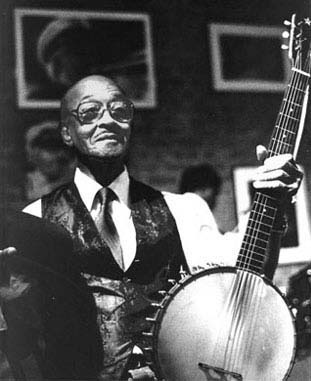 Danny Barker was a true original.  His activities were vast: jazz banjoist, guitarist, singer, songwriter, ukulele player, actor, raconteur, griot, and a tireless torch bearer of New Orleans music.  Danny Barker's long and enduring career spans most of the 20th-century and if one listens to him close enough they will hear the entire history of jazz from the 19th century brass bands and dance bands through Jelly Roll Morton, Louis Armstrong, Sidney Bechet, Cab Calloway, Billie Holiday, Charlie Parker, and Wynton Marsalis, with many, many side streets on the way.  Danny Barker is jazz.  Danny Barker should be taught in every public school and every college in America and abroad!

Though Barker was not the first or only great banjoist to come out of New Orleans, he brought the art of New Orleans traditional jazz banjo and in a broader sense banjo music in general to whole new levels of sophistication, artistry, beauty and expertise.

Danny Barker was born in New Orleans in January of 1909 and died in March of 1994.  He came from a very musical background. His uncles, the Barbarins played with the early marching bands in New Orleans in the 1880s that evolved into the first jazz bands.  Danny’s first banjo was a ukulele banjo he bought from his aunt.  In his autobiography he tells of his spasm band he organized around his ukulele banjo while attending Medard’s elementary school (a spasm band is usually a children’s band, composed of make shift, homemade instruments).  Barker’s spasm band, called the “Boozan Kings” got too much attention and was forbidden to play in the school yard.   The “Boozan Kings” (meaning party or good time) would hustle for tips on the streets of the French Quarter and play house parties and even played the Anis Hall.  Barker recalls, this is how he “started in the music business.”

In his early formative years as a musician Barker played tenor banjo and took a few lessons but most of his education came from attending dances and watching the banjo players.  Barker would sit in for Caffrey Darensbourg at the Alley Club downtown, and, as he puts it: “the band relished me, because I think I had a little more spark than he had…hat’s what I do now…you can pull the whole band, not by the tempo, but you can give it a whole lift as feeling if you jazz that rhythm up.  Banjo players could do that, because they didn’t have pianos in the band.”  [see July 21-23 1992 interview of Barker by Dr. Michael White Smithsonian Jazz Oral History Program]

Danny worked as a banjoist and guitarist for a several years in New Orleans and then through the encouragement (insistence) of his uncle Paul Barbarin, moved to New York City in the early 1930’s.  Though he brought his tenor banjo to New York, he found that the new trend there at that time was not for banjo but rather for guitar.  Danny switched to guitar and it was with this instrument that he became part of the music scene in New York.  In the 1930’s Barker played and/or recorded with Henry “Red” Allen, Mills Blue Rhythm Band (Lucky Millinder’s band), Buster Bailey, Ethel Waters, Blue Lu Barker and, also in the ‘30s, he began a tenure of nearly a decade with the Cab Calloway band, at the time one of the biggest bands in the country.  Over the next 3 decades Barker worked with countless Jazz luminaries such as Jelly Roll Morton, Lionel Hampton, Ella Fitzgerald, Billie Holiday, Charlie Parker, and Louis Armstrong.

It was in the late 1940’s that Danny took up banjo again.  This time it was a 6-string banjo, the same instrument as one of his early influences, the great Johnny St. Cyr (April 17, 1890 - June 17, 1966).  It was in 1947 that Barker first released a recording on 6-string banjo, with Tony Parenti’s Ragtimers.   There were several more sessions in between but in 1954 and ’55 Barker gave his finest banjo recordings to date with a stellar New Orleans band led by his uncle, the legendary drummer Paul Barbarin. These sessions are pure New Orleans style jazz and feature Danny on some very exciting, original, swinging solos as well as some original songs and Danny’s timeless masterpiece rendition of the New Orleans Creole song about eating too much: Eh! La Bas.

Listening to these recordings it is evident that by the time he took up 6-string banjo Barker had a fully developed style of his own that used some of the exciting rhythms of Johnny St. Cyr as a take off point.  Danny, having performed and recorded extensively with the some of the greatest musicians in jazz, had also found ways to incorporate some wonderful color tones in his banjo chord voicings, a practice that was not explored by his hometown dance band accompanists.  These highly sophisticated approaches to rhythm and harmony along with Danny’s feeling for blues and constantly reinvented melodic phrasing in each performance are what make up the Danny Barker style. In 1958 he recorded an entire album featuring the 6-string banjo and all of these elements of his technique and performance are in the forefront.

When Barker returned to New Orleans in the late 1960s he was an active performer on banjo and guitar around the local scene.  With traditional jazz bands and with his wife, blues singer Blu Lu, he performed on banjo and guitar in local venues and festivals as well as acting as grand marshal in street parades and recording with many local legends including The Dukes of Dixieland, The Dirty Dozen Brass Band, Dr. John and Wynton Marsalis.   Also in these later years, he wrote his autobiography A Life in Jazz (Oxford University Press 1988), worked as curator of the New Orleans Jazz Museum and, for the first time in his career, he traveled abroad to tour in Europe.

Returning to New Orleans Barker was sad to see the brass band traditions of New Orleans not being carried on by the younger generations.  Shortly after moving back permanently to New Orleans, in 1970, Reverend Andrew Darby of the Fairview Baptist Church in the 7th ward of New Orleans encouraged Danny to start a youth brass band.  Led by Barker and called the Fairview Baptist Church Marching Band, these activities helped launch the careers of many musicians who have since been acclaimed around the world including Leroy Jones, Greg Stafford, Shannon Powell, Lucien Barbarin, Tuba Fats, Kermit Ruffins, John Boutte, and Branford and Wynton Marsalis and to name a few.  It would take a full book to note Barker’s influence on New Orleans music and musicians.  spiritofneworleans.com/Fairview.htm

Every January in New Orleans there is a Danny Barker Guitar and Banjo Festival that celebrates the life and legacy of our hometown hero through concert performances, workshops, and panel discussions featuring the finest local jazz musicians on todays scene.  The festival, started by Detroit Brooks in 2015 gives the New Orleans community a chance to get together and share stories, songs and life lessons learned and earned through associations with Mr. Barker.  Though I never met Danny Barker (I moved to New Orleans in 1999, 5 years after his passing) I have been lucky enough to have played with many New Orleans musicians who had played extensively with and/or been mentored by Mr. Barker.  Each one has expressed their recognition and appreciation of the Danny Barker style in my playing.  It is these associations that have brought me to tours in Europe and Japan and festivals and concerts all over the United States since 2006 and frequent appearances at the Danny Barker Festival in New Orleans.  In November of this year I will be releasing a CD and essay covering the history of the banjo in New Orleans and Danny Barker’s banjo artistry will be represented from his “Boozan Kings” spasm band all the way through to his later band the “Jazz Hounds”.

You can learn more about the author Seva Venet by visiting sevavenet.com.