From the first time we heard Mean Mary’s music we at Deering have been fans. So it is no surprise we are very excited about her upcoming album Cold, and new video for her song “Dark Woods” off of the album.

To clarify an important fact, Mary James, the singer, songwriter, and banjo/fiddle/guitar player also known as Mean Mary, is not mean at all. The name comes from a song she and her mother wrote before she was even in kindergarten called "Mean Mary from Alabam."

Mary is the youngest of six children, born in Geneva, Alabama. Traveling all over and learning music from a young age, she has a depth of life to her that resonates in her songs and lyrics.

We are pleased to have the chance to catch up with Mary and share more about who she is and her musical journey.

Jamie: Tell us about your new song “Dark woods”. What was the inspiration for it?

Mary: Sometimes I just want to escape all the routine and deadlines of life. Since I don’t have much freedom when touring or recording, I have to remember those moments when I could escape. I wanted a song that would bring some of those memories back to me and maybe bring them back for others too.

Jamie: How would you describe your upcoming album Cold?

Mary: Definitely cold! It has its dark and gothic moments, but with sunlight always right around the corner.

Jamie: Do you have a particular favorite track on the new album?

Mary: It’s difficult to have a favorite because I put so much work into each one.

Jamie: That is a great answer Mary. You have a wonderfully original sound and feel to your music. Who are some of your musical influences?

Mary: Basically, I was influenced by the music itself. I started playing instruments and singing when I was 4 years old. When I was five, I learned how to read music and I practiced almost seven hours a day. My musical influences were from the songs that I chose from books. I never heard the artists perform them – I just learned the tune from the sheet music.

Jamie: Give us your gear rundown, what are the instruments and items you use to create your music?

Mary: Warmth and resonance with clarity is what I look for in tone. The Deering Goodtime Midnight Special is my road warrior and the same banjo I take into the studio. On my albums, I like to use the same instruments that I use for touring. Since I use pickups instead of a mic on my live shows, I usually run my banjo through an LR Baggs preamp. When I’m recording, I use the Cloud 44-A ribbon mic that Cloud microphones gave me. I’m not into a lot of frills. I try to keep things as natural as possible.

Jamie: You have inspired many people to love and play the banjo. What was the learning process on banjo like for you? What advice would you give to those starting out?

Mary: Practice, practice, practice. I don’t believe you can be too young or too old to learn something – you just have to practice. I obviously started off very young, but I get emails from folks that are 80 years old and are just starting to play the banjo. I think that’s great! Everyone that starts playing an instrument has that fire of music inside them or they wouldn’t be drawn to it to begin with. I think we should remember that fire when we make music. Forget about your heroes or every other musician out there that you think might be more experienced and just play from your heart. We are all unique.

Jamie: What are your touring plans coming up?

Mary: I’m playing some select shows this year. Looking forward to seeing all my friends at the Deering factory next month when I’m touring out west and near San Diego! I’ll be pretty much everywhere in the US and parts of Canada in 2020. I’ve had 3 wonderful tours in the UK and Europe, so I’ll see those folks again in 2021.

Jamie: Being on the road can be both an exhilarating and a trying activity sometimes. What are some of the things that keep you sane when on the road?

Mary: I’ve been keeping a journal, which sounds a little cheesy, but it’s been a great help. There are pages full of notes that became songs on this newest album. I especially needed that journal last year because I toured for 3 months straight with my brother Frank!

Jamie: Where can people preorder your upcoming album Cold?

Mary: You can get it at meanmary.com/cold . Also, here’s a special 15% off discount code: darkwoods 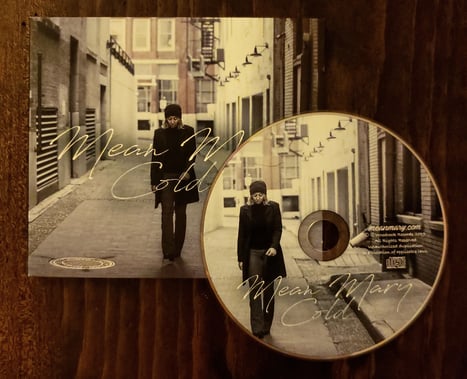 Jamie: How can people stay up with all you are doing?

Mary: All these places...