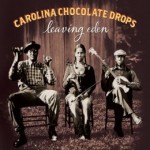 From North Carolina, Arizona and New York state, today’s core members of the Carolina Chocolate Drops have followed the siren call of music. They are all multi-instrumentalists and each bring their own richness to the vocal renditions on the CDs and live performances. 2010’s “Genuine Negro Jig” album has been followed by recently released “Leaving Eden”. Both have been well received and “Leaving Eden” includes the addition of 2 guest performers, Adam Matta and Leyla McCalla.

There is an increased energy, versatility, and new direction to the music of the group. As Dom Flemons points out:  “There’s a new diversity that comes from the new ensemble. My thought process of how I put together songs for the Carolina Chocolate Drops now is more like working with a jazz group. I could make it work in any sort of way. Based on the players that you have, you can do different things with the arrangements. It was helpful that Hubby also played guitar. Up to then, I was the only one in the group who worked with chords. Rhiannon plays her instruments melodically instead of around chords and the rhythm of the chords. I had been working on ‘Mahalla’ [an arrangement of a joyfully upbeat piece from spoon-wielding South African slide guitarist and YouTube phenomenon Hannes Coetzee] for a while on my own, just on the banjo, and I would have liked to have guitar on it too, but I couldn’t get anyone to back me up. Hubby happened to know the song as well, so that track came out of Hubby being there. Adam brought a great, pumping bass vocal part to ‘Po’ Black Sheep,’ and ‘Country Girl’ also has Adam’s particular flavor—along with Leyla’ s cello.”

Musical growth and exploration is healthy for any group, but Rhiannon Giddens comments: “We want to remain true to the roots of how we started. We’re always going to have a string band on our records. But we don’t want to just do Piedmont style fiddle-banjo-guitar tunes; there’s more to our musical life than that. We grow in a healthy, slow way that reflects our true development as musicians and as a band.”  The exploration will bring new fans to the live performances of the Carolina Chocolate Drops.  Continues Giddens, “We’ve held on to our original fans and we’ve now got a lot more younger people coming to our shows and more people of color, which is fabulous. We’ve been working off that actively, doing stand-up shows where we cut the talking down a bit, keep the tunes coming, and get everybody dancing. And we still have our shows where we sit and talk about the material, do our slow waltzes and stuff like that. It keeps everything flowing.”

On tour for their new album Leaving Eden, I had the opportunity this last week to attend the Carolina Chocolate Drops concert at Royce Hall, UCLA.

To say this was a memorable show is an understatement, starting with the exquisite venue of Royce Hall. Not only does the beauty of the architecture and artwork inside make it special, but the acoustics of this theatre truly lend themselves to live music of any kind. It is one of those older buildings the sound resonates throughout and gets fuller with each note. If you ever have a chance to see a show there I suggest to take the opportunity.

I have heard the Carolina Chocolate Drops music for years now and how wonderful they are, but had no idea of the goose bumps I would experience seeing them live for the first time. They are masters of their trade intertwining effortless playing with harmonies and vocal arrangements from the soul and their love for the music they create.

Playing an impressive variety of instruments from bones to fiddle, steel mandolin to an acoustic guitar and of course their Deering Sierra Plectrum and Vega No. 2 banjos which make up a core part of the Chocolate Drops sound. I was quite moved personally when Rhiannon shared with the audience that besides her minstrel banjo (a stunning replica of an 1840 model), that all they play are Deering Banjos.

Their sound live is as pure as their album, but to feel the energy and emotion they have in performing adds a whole new dimension to each song, not to mention the prompted audience participation. For just a little while it felt like we were all a member of the Carolina Chocolate Drops, a feeling strengthened by their humorous banter and emotional stories between songs.

Sitting in the audience or listening to their album I experience what music felt like in the 18' and 1900's, almost like going back in time, but they have brought it back to life for us and it is a special part of today's music. They are magical in that they are bringing these styles and songs back to life and they fit in our hearts as a part of today’s culture.

Talking with Rhiannon, Dom, Hubby, and Leyla is like talking with an old friend - warm and genuine. You can’t help but feel good after getting to chat with them. If the hour had not been getting late I would have enjoyed talking with them for hours more about music, banjos, and life….three things they are more than qualified to speak on.