The banjo can take you to places you would never expect! British Deering endorsing artist, Dan Walsh, was approached by the British consulate to join a multi-national group of musicians and travel to Calcutta, India. There the group would learn to blend their musical skills on their chosen instrument. Here, in Dan’s own words, we learn about the far-reaching effects of playing banjo!

I was excited enough when the call came asking me to take part in a collaboration project. When they said it was in Kolkata (Calcutta), India that was quite another thing! The British Council and the English Folk Dance and Song Society selected me and three other British folk musicians to fly out to India and spend a week sharing and making music with six South Asian musicians and then perform in Kolkata at the end of it. The other musicians were Scottish fiddler Patsy Reid, English accordionist Hannah James and Welsh harpist Georgia Williams. The Asians were Suhail Khan (sarangi), Suarav Moni (singer), Waqeel Ahad (singer), Shafique Mia (dhol), Shahid Hamid (singer/harmonium) and Turab Ali (sitar). 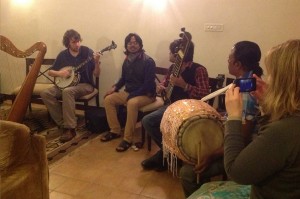 The emphasis of the trip was very much on sharing and making music and not so much as a concert performance. The performing opportunity was put to us as less a gig and as more of  an informal sharing although inevitably performer's instinct took over and the last couple of the days of the residency were spent working towards the concert. This was a wonderful opportunity to create new musical fusions and at the risk of sounding too grandiose, perhaps bridge cultural divisions.

There were certainly plenty of those. We Brits, as folk musicians are used to working from ear and improvising or jamming to see what happens but compared to many of the Asian musicians we seemed positively over-structured! They seemed very much keener on simply playing material and all improvising along, yet they seemed to instinctively know how they'd all improvise as if there were unwritten guidelines. I guess in some ways this isn't that dissimilar to bluegrass or British folk music. I remember in folk sessions over here frequently being asked by people 'how do you know what's happening next?' Nevertheless it was tricky at times, particularly when trying to arrive at a rough arrangement for a full band item and actually stick to it! 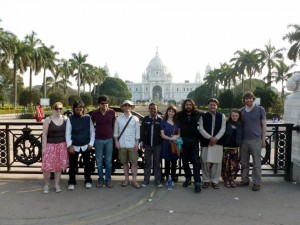 They seemed quite taken with the banjo and were not aware of it prior to the residency. My experience was perhaps slightly different to the others in that I've spent some time working on sitar sounds on the banjo so this was a dream for me to try that out in its 'real' context. It was of course daunting but I was pleased that they seemed impressed with my ability to create Indian sounds. In a way it backfired on me though because I think they expected me to know more Indian structures as well which I really didn't! This was particularly the case when I was playing a raga with Turab as he would say the names of sections to go into that I wasn't familiar with.

The way the week was structured was we spent a couple of days in organized duo and trio sessions so everyone had a chance to work with everyone else. For instance, I played Shady Grove to Suhail and Georgia and we turned it into a cracking trio piece. The sarangi seemed to fit surprisingly naturally in bluegrass, as did the harp, and I really felt we created a genuinely new sound and took the song in a direction it's not gone in. The others seemed impressed too and they said they weren't familiar with American folk before. Other sessions were very much led by the Asian guys sharing their material and leading the arrangement but I personally was quite happy with this as I wanted to try and get to grips with the more subtle features of Indian music in terms of arrangements and patterns. I misinterpreted a few of them as being quite instructive but actually I think this was a language barrier as much as anything. Suhail was quite an important member of the team as he was from Delhi and had gone to a very multicultural school so he was a little more 'Western' in some ways but of course had a deep understanding of Indian music and culture as well.

Culturally, the city was like another world. Everything was very manic and seemed to thrive on chaos! The car journeys seemed unbelievably hairy to a Brit and how they don't crash into each other every two minutes I'll never know. I was also taken aback by how fascinated the natives were with us as Western visitors. I've never been stared at so much (I was even asked for a couple of photos!) and accosted so often by sales people. They were very friendly for the most part though and I did not feel threatened, just very different. 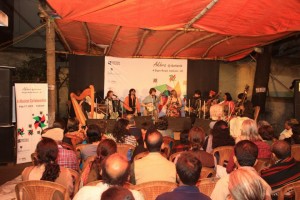 The concert was truly an experience I will treasure forever. The preparation was less than ideal as for the only time in the week it rained heavily which on the day of an open-air concert is not ideal! Worse still, perilously close to the concert the covers weren't up and the PA wasn't ready with ten anxious musicians waiting to sound check. Still, the concert surpassed all expectations I think.

I have performed many times but I'm not sure I have ever been so proud as when I received a round of applause for my lead break in the raga I played with Turab. To get approval from an Indian crowd for my playing of Indian music meant a great deal. The crowd seemed to get a real kick out of us Westerners playing their music which was highly refreshing and not what I had expected which was they might disapprove when we inevitably didn't do it quite right!