We left off in the Banjo Bus Adventure Part 1 hitting the road to Guthrie, Oklahoma…the location for the next Gentlemen of The Road Stopover! The first afternoon in town we stopped in and paid a visit to a big part of bluegrass history and talent, Byron Berline and John Hickman at The Double Stop Fiddle Shop. We were honored to get to sit down and spend some time with both of them.

Rolling into Guthrie at the start of September was hot…intensely hot, but that did not stop 30,000 people from coming out for the Stopover. Guthrie was also a special one for us, Janet and Greg Deering came out to be a part of it!

It doesn’t take long before Greg Deering has his toolkit open and is fast at work on a banjo. The one shown in the photo below was an old tenor banjo Christian, from the band Edward Sharpe and The Magnetic Zeros, picked up and added his own art to. It needed some work to be played, which Greg was happy to do. 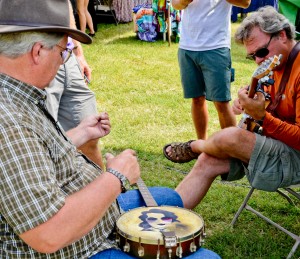 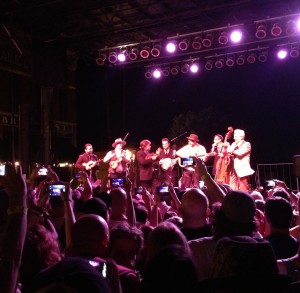 An unexpected treat at this Stopover was seeing the Del McCoury Band playing in the middle of Downtown Guthrie. It became a rare event all in itself when Marcus Mumford of Mumford and Sons, and Ross Holmes jumped on stage, guitar and fiddle in hand and performed a song with Del. Needless to say the crowd, and all of their cell phones, were really into it

Oklahoma City was our next stop at The American Banjo Museum for the opening of their new display honoring “Bluegrass Pioneers & New Traditions”. Here at Deering we are proud to have contributed to this section of the museum coming to life.

This event saw several hundred people from all over visit and see the new display of banjos added to the already stunning array in the Museum’s collection. If you find yourself going through, or even near Oklahoma City this is a MUST SEE, even with just an hour to spend it is worth it. Here are a couple examples of the kind of rare pieces they have: 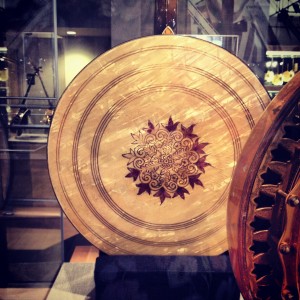 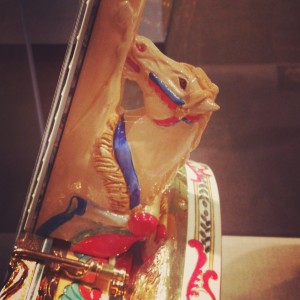 Yes this is the heal of a banjo! 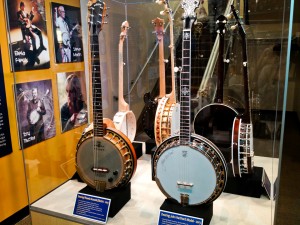 You can now find the following Deering Banjos on display at the American Banjo Museum:
Goodtime Openback, Phoenix, Crossfire, Vega Long Neck, Tenbrooks Saratoga Star with Kruger Tone Ring, The Banjosaurus, Deering 35th Anniversary Banjo, Eagle II with the customized inlays and specs of Winston Marshall from Mumford and Sons (Peghead shown below), Hartford banjo signed by John Hartford! Plus a variety of Goodtimes for a hands on banjo petting zoo display, including a Goodtime Open back Acoustic-Electric, Zombie Killer, Dropkick Murphys Tenor, and a 17 Fret Irish Tenor. 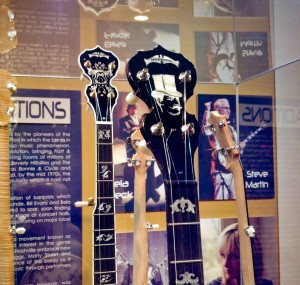 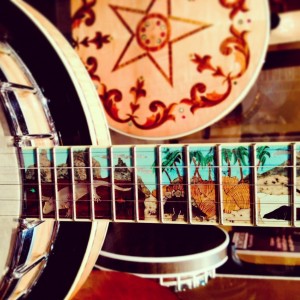 A section of the one and only Banjosaurus Long Neck! Owner George Grove of the Kingston Trio has loaned it to the museum to be on display there for one year. Now is the time to see it! The dinosaur scene of the neck is made up of intricately hand cut inlays of several different kinds of stone.

Mike, Vinnie, Arthur, David and I hit the road in the Banjo Bus right after this photo for the final Gentlemen of The Road Stopover in St. Augustine, Florida. On the way there we planned a short stop in New Orleans!

To introduce Mike and Vinnie, they are friends of mine from Orange County, CA who are also in the awesome band Vinnie & The Hooligans . They came out and joined the Banjo Bus for Guthrie and St. Augustine helping at the Stopovers giving lessons and answering banjo questions while enjoying some of the bands that were on the bill. It was really nice having them on the road with us and I greatly appreciated their help and fun vibe they added to the trip.

On the road to New Orleans, literally!

Spending a day in New Orleans was a cultural experience for never having been before, hearing awesome Jazz in the French Quarter, seeing the traditional New Orleans architecture and yes, the seafood was delicious! 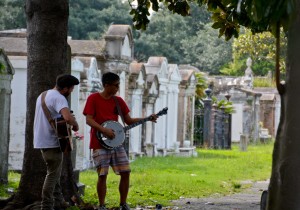 Mike and Vinnie played some tunes for the dearly departed at a New Orleans Cemetery. Above ground cemeteries were quite novel for us having grown up in Southern California.

Vinnie giving a lesson at the St. Augustine, Florida Stopover. He only recently started picking up the 5-string banjo as a guitar player, a fact that made teaching banjo basics to fellow guitar players pretty easy. 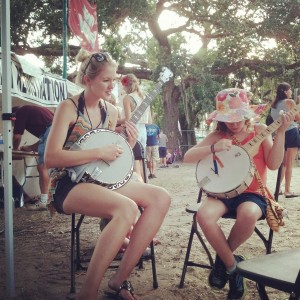 Our good friend and Deering artist Ashley Campbell, of Victoria Ghost came down and joined us in St. Augustine. Here she is giving a lesson to a young lady, bit by the banjo bug, who didn’t want to put it down!

It was a sad moment to realize the St. Augustine Gentlemen of the Road Stopover would be the last one for this year. That being said, it has been an amazing summer taking part in the Stopovers, seeing good friends and meeting new wonderful ones. I still miss seeing them all each week! I would like to say thank you to the entire Mumford and Sons team. They are inspirational people that I really enjoy working with.

Following this we headed north to Nashville, Tennessee for a few days at the Americana Music Conference. The Americana Music Honors & Awards show was a very special event to be at with performances by Lifetime Achievement Awards winners Duane Eddy, Dr. John and Robert Hunter; all phenomenal musicians I never thought I’d have the pleasure to see perform live and who are more than deserving of their awards given. 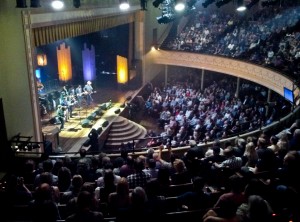 Old Crow Medicine Show performing at the Americana Honors & Awards Show at the Ryman Auditorium, where they also received a Trailblazer Award, presented by Ed Helms.

Yes, our last stop on the journey was at the International Bluegrass Music Association Conference in Raleigh, North Carolina. At this conference the past present and future of Bluegrass is celebrated and shared. This was the first year in Raleigh and I would say it was a hit! It impressed me how much the community came alive and everywhere you looked live music was being played and enjoyed.

Catching up with several good friends and Deering Artists who were there was especially nice!

I was thrilled to learn IBMA and Raleigh arranged a fantastic program to have IBMA attending bands go out to local schools, perform for the kids and answer questions about the music and instruments. Our friends and Deering artists The Henhouse Prowlers did this and had a great time. They were impressed with the questions the kids were asking and interested in. Here are a couple of photos from one of these school assemblies. 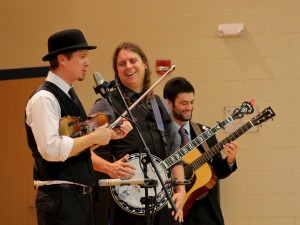 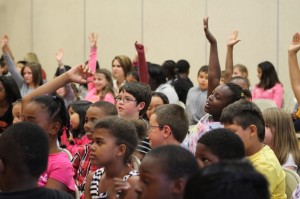 Kids eager to ask questions about their Bluegrass instruments and performing 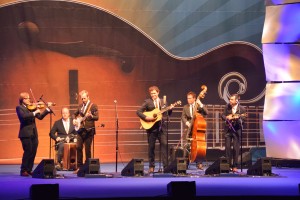 Likely one of the best IBMA Award shows to date, with The Steep Canyon Rangers hosting there was no shortage of laughs. It was a memorable night combined with heart felt emotion and fantastic music. 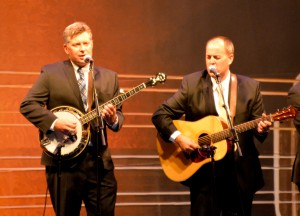 Deering artists The Gibson Brothers Performing at the IBMA Awards. This band also took home several awards that night: Entertainer of the Year for the second year in a row, and three other group and individual trophies! 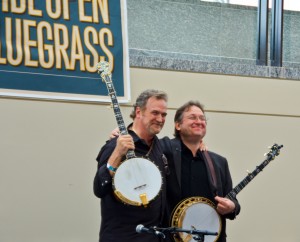 One of the many things special to IBMA: you get masters like Jens Kruger and Mark Johnson doing banjo workshops together for anyone to attend. I’d say they love getting to do these as much as all the folks in the audience, check out those smiles at the end of their workshop this year.

On September 29th we left Raleigh, NC with a mission: reach San Diego by October 2nd. By this time we had become seasoned travelers and took on this challenge! Day one was “short” only Raleigh to Nashville. Day 2, Nashville to Abilene, Texas. Day 3 Texas to Eloy, Arizona. Day 4 Arizona to San Diego, California. 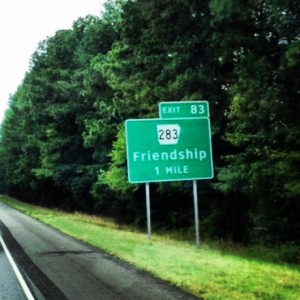 Arkansas on the drive home. Now we know where to go when we need it. 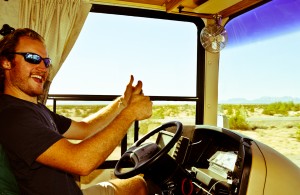 Arthur Hancock at the helm driving through the Arizona desert!

We succeeded in this mission with flying colors. Arthur is one of the all time best distance drivers and was a major part in this trip being a success. Thank you.

I would also like to personally thank all of those who made this possible or contributed in any way, including sponsors Mel Bay, Remo, The Bluegrass Situation, Kavanjo Pickups and the Banjo School with Tony Trischka. Everywhere we went folks were checking out the Banjo Bus, asking us all kinds of questions and telling stories about banjo and music. It was refreshing to see all over the country how music is still a topic that brings people together in the modern world, even at a gas station in the middle of nowhere. 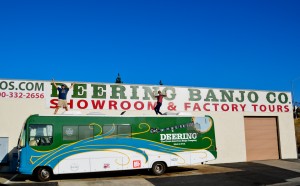 Yes, this is Arthur and I doing a victory dance on top of the Banjo Bus on completing this intense journey!

It was a stunning San Diego day when we rolled back into the factory on October the 2nd. Champs!

Banjo Bus has had an epic summer!

Until Next Time,
Jamie