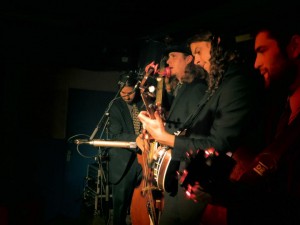 Ben is a founding member and banjo player of the Chicago based band Henhouse Prowlers. In 1999 at age 23, on a whim, he bought a banjo at the legendary Old Town School of Folk Music, and has not looked back. This is a first hand telling of some of his recent adventures and becoming one of the newest members of the Deering family of artist.

It almost goes without saying that there are inherent risks involved with putting yourself out into the world of performance. Two hundred+ shows a year means you're on the road more than you're not; and while the law of averages means that things are going to go wrong sometimes, it also means that pieces are going to fall into place perfectly at the right moment. This is just that kind of story for our band the Henhouse Prowlers.

Earlier in 2012 we were selected to compete on the Mountain Song at Sea bluegrass cruise against six other bands, due to sail in Febuary 2013. We booked a couple shows from Chicago to Miami to cover the gas and headed south, excited to be a part of the first cruise of its type. Of course, three hours shy of Miami (and 5 hours short of departure) our van sputtered to a halt on the side of the highway. A call to a mechanic and a rental car agency put us back on the road quickly and we miraculously made the boat, despite fevered visions of seeing it depart without us.

Bluegrass Today wrote a really fun article about the whole experience that you can see here: http://bluegrasstoday.com/henhouse-prowlers-rock-the-boat-at-mountain-song-at-sea/

We went on to compete and win the competition, which was exhilarating and a huge honor, considering the bands we were up against. However, there was a bit more to the story than the article covered...

On the second day of the cruise I went for a walk to check out the massive ship. I saw on the schedule that Deering Banjo's had a 'Petting Zoo' on board and I wanted to sniff around and see what it was about. I walked onto the forward deck and found a welcoming crew of Deering staff and about 25 banjo's for anyone to sit down and pick. I pulled a Sierra model from its stand and got into a jam with several people right off the bat. The whole scene was beautiful. Endless ocean out the windows, some Fireball Mail with new friends, and Jens Kruger demonstrating his own banjo directly behind me.

Before long Jamie Deering struck up a conversation with me about the competition and we discussed my banjo (a custom model made by a friend in Michigan) and how its sound was tailored to more traditional bluegrass styles. The conversation was cut short due to the volume of people in the room and I went about my tinkering as she attended to more questions and banjo inquiries.

The prize for winning the competition was a full hour set on Sunday afternoon which was a thrill, as well as packed with new friends and fans. As we sat down back stage to wind down after the show, Jamie walked in with several banjo cases and sat down next to me. She handed me a Golden Wreath model and asked me what I thought of it. I played it for a few minutes and took to it immediately. Its tone was almost bell-like and it cracked under my finger-picks. She then mentioned a possible endorsement if there was a Deering Banjo I was interested in playing. I was honestly stunned (and maybe just a tiny bit excited) by this suggestion, as I had not ever really considered something like that might fall in my lap.

The cruise ended with new friends and wonderful memories in our minds as we made the twenty hour drive back to Chicago. After two days off at home, we started up our normal schedule of touring again.

I will now jump forward a couple months to March 26th, 2013. The Prowlers were in San Francisco to audition for the prestigious American Music Abroad program. After the audition was through we were exhausted and simply happy to be done with something we'd worked weeks to prepare for. That night we slept a little too hard at a friends house in Oakland and someone broke into our van and stole nearly every piece of equipment we own...including my banjo!! The drive back to Chicago was quiet and solemn, but we were determined to find a way around the tragedy. I had stayed in touch with Deering over the previous month desiring to get the Golden Wreath in my hands and as fate would have it, it was waiting for me in a giant box when I got home.

One of the best things about working with Deering is that they genuinely want me to be happy with the banjo I'm playing. I found quickly that the Golden Wreath, wonderful banjo that it is, wasn't exactly what I wanted and they suggested I try another model. I've now settled into their Terry Baucom model (one of my all-time favorite players) and 8 shows in, I can say I'm thrilled to be playing it. That's saying a lot considering I lost a banjo that was dear to me.  The whole thing feels good in my hands too. The neck width is exactly what I was used to and it sits on my shoulders well. The intonation is pretty amazing and it's clear and in tune.

We started a Kickstarter campaign to help pay for our forthcoming album and hopefully recoup some of the losses from the theft. The response has been pretty amazing and heartwarming from those coming forward to give support. The campaign ends on Monday, May 6th and there are some pretty cool bonus one can get as part of it. Any and all contributions are greatly appreciated. Check it out here: http://www.kickstarter.com/projects/henhouseprowlers/breaking-ground-0.

The random good timing and kindness from Deering has been wonderful and reminds me how lucky I am to be playing bluegrass music. The musicians and fans of the genre are equally as gracious as the people that build the instruments.

You can connect with the Henhouse Prowlers here... 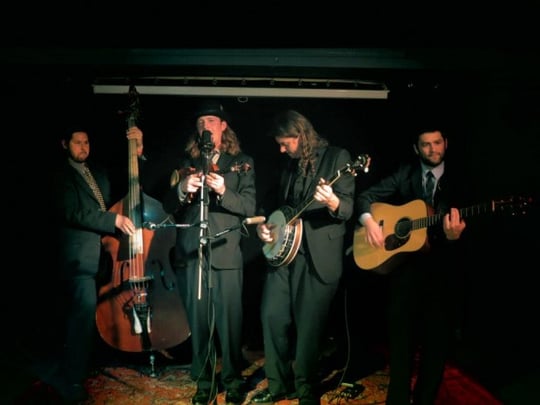