As I write this today, most of you have probably heard that banjo legend Earl Scruggs passed away this week.

Earl Scruggs is considered by many to be the world’s most influential banjo player.   I have never met anyone who listened to Earl Scruggs play “Foggy Mountain Breakdown” who was not moved by his expression and emotive power.  Earl was an innovator.  Earl was an entertainer.  Earl wrote banjo pieces that carry the same timeless appeal of some of the greatest classical composers.

But above these great attributes, Earl created magic.  I can’t think of any other description that so accurately describes the energetic passion that flowed from Earl Scruggs when he played the five string banjo.   This is the measure of the great masters; “Communicating” more than the notes being played.

When banjo dealer, John Drummond of Banjo.com, met Earl many years ago, he asked the master if he still practiced every day.  Earl thought for a moment, and said, “no…but I probably should.”  This down-to-earth, humble, gentleman was as surprised by his success as his audiences were enthralled by his performance.

From the theme of the T.V. show  “The Beverley Hillbillies” ,  to “Foggy Mountain Breakdown” (the theme to the movie Bonnie and Clyde), “Earl’s Breakdown”,  to the “Flint Hill Special” and all of the songs in between, Earl’s songs and performances touched millions and millions of lives around the world.  Millions of young people have looked to “what Earl did” when learning to play the banjo and millions of experienced players still look to “what Earl did” to refine their technique in an attempt to capture some of the “magic” created by this humble master.

It is a rare individual whose art touches so many lives and Earl Scruggs will go down in history as an artist who defined an instrument and one of the greatest banjoists who ever lived.

From all of us at the Deering Banjo Company, we offer our most sincere condolences to the Scruggs family. To Earl Scruggs, for a lifetime of inspiration, joy, guidance, giving and grace, and for playing the banjo in your unique and beautiful way …Thank you. 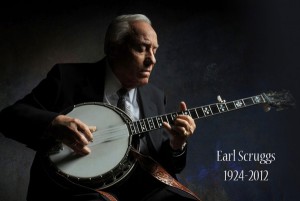 Earl was a life changing individual whose music touched so many people, myself included. Were it not for the popularity of Earl’s banjo style Greg and I...