Redefining What A Banjo Can Do

It's usually worded that way and it's the use of the word bluegrass that interests me. The overwhelming assumption, not unreasonable I might add but interesting, is that I must play old time clawhammer or three-finger style bluegrass. This is not in any way a claim that no banjo players go against that of course, far from it. The likes of Bela Fleck, Ken Perlman or Michael J Miles (and many others) have all experimented greatly with the banjo but perhaps most strikingly all three of those players had to make quite a conscious decision to deviate from the 'usual' path of their respective playing styles having very much begun within them.

And this brings me to an aspect of banjo that is highly intriguing; the idea that it does very particular jobs and that that is the only logical thing to do. Why is this? After all, it is hardly the most limiting of instruments – it has considerable range, has plenty of dynamic variation and can produce chords, single lines or a combination just like a guitar and yet I doubt anyone gives a guitarist a multiple choice question of how they play guitar with only two options! 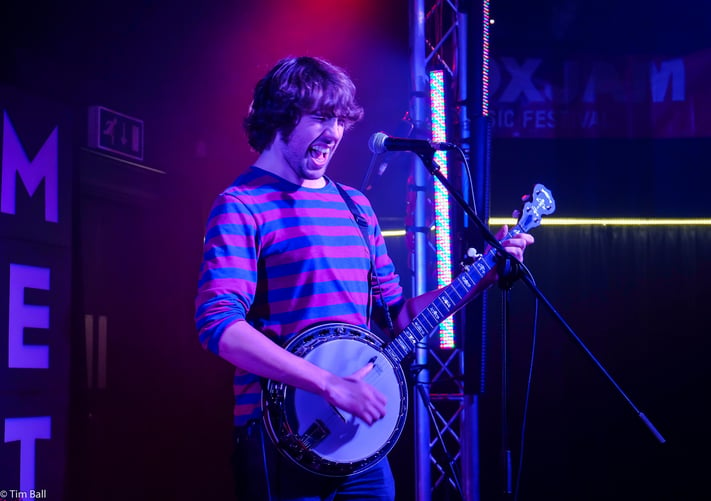 In a sense, I was very fortunate to be utterly unaware of these supposed guidelines. I stumbled across the banjo quite by accident aged 13. I was an obsessed guitarist with no particularly burning desire to play another instrument when I began to become more and more interested in the sound of the banjo I was hearing in the large amount of Irish folk music that I was listening to. The final realization that I had to play the banjo was watching Barney McKenna play a set of reels gradually getting faster and faster culminating in an outrageously speedy rendition of the High Reel. That was it. I had to play that instrument and I told my parents as much. Well I asked. And bless them, they did some research at the local music shop in my hometown of Stafford, in the middle of England and asked about banjo teachers. The blank expression on the face of the shopkeeper was followed by a moment of relief when he spotted among the myriad of business cards on the wall one for George Davis in Cannock (not too far away). Mum and Dad came home and said 'we've found you a teacher – he teaches melodic clawhammer'. He turned out to be the greatest mentor anyone could ask for.

I hadn't the faintest idea what melodic clawhammer meant. Some of you more banjo orientated people reading this might have already been wondering: if a guy wanted to play Irish folk music he'd heard on tenor banjo then why the hell did he get lessons from a 5-string melodic clawhammer teacher? Well that's just it – I had no idea there were different banjos let alone different ways of playing them. I just knew I liked that sound and rather fortunately George used a lot of arrangements by Ken Perlman who is of course a master at playing jigs and reels in clawhammer style. Believe it or not it wasn't until a year into playing that I realized I was playing a completely different instrument to that one Barney played when he picked his way through the High Reel. Different number of strings, different pitches, different tunings, different usual playing style – the lot! But by then I knew it was a happy accident. I discovered bluegrass not long after as well as keeping up what had been a more or less lifelong interest in music from all over the world.

I liked and still like old time and bluegrass music very much. In fact I love it with all my heart and soul but when I started the five string banjo I'd never heard of it and I'm probably reasonably unique in that. I had no idea of what the banjo was 'supposed to do' so clawhammer for me has never been about deliberately 'going outside the box' because I never knew what the box was. This is not any kind of self congratulation, simply a statement of fact as to why my playing has always been fairly eclectically influenced. I loved Egyptian tunes (as every teenager does...) so I played them on banjo because that was my instrument. I started messing about with funky clawhammer because I liked funk and I played clawhammer. And more recently I've dabbled in Indian classical music because I love it and...well you get the idea. This doesn't make me any better or worse banjo player than anyone else. I can probably never play or understand bluegrass or old time like someone who grew up steeped in it be that through family or their surroundings. I didn't grow up in a musical family or in a place with a particularly strong living folk music tradition (I'm choosing my words carefully for there are plenty of Staffordshire folk songs if you look hard enough). But what I did have was a complete freedom to treat the banjo as what it is – an instrument pure and simple.

Both traditions and innovations should be healthy, vibrant things. I was fortunate enough to study folk music in depth at university and met Shetland fiddlers who had grown up playing the traditional tunes of the islands with their family or Cornish shanty singers who were singing the songs of their region that had been passed down. I can never do what they do because I wasn't blessed the way they were. But as I say, I was perhaps blessed with a freedom that has allowed me to explore the instrument – the results are purely a matter of personal taste! 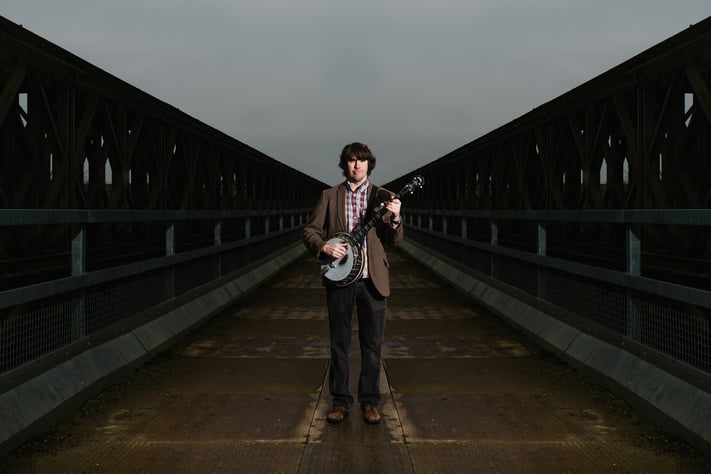 Interestingly when I started to perform at pubs around my region aged about 16, I really did discover just what many people in England expected from the banjo. Bear in mind though I was aware of three finger style, clawhammer and tenor banjo by now I still wasn't aware of how usual it was to stick to a particular area – e.g. clawhammer = old time and three-finger = bluegrass. In England, or Staffordshire at least, the expectations were even less varied! The moment the banjo was out of its case, up went the cry for Deliverance or George Formby or possibly both. Without fail. This was of course intensely irritating not because I particularly dislike either of those two things (or even that one is the wrong instrument...) but rather the way in which it was put to me. A mocking, almost jeering request that essentially could be translated to 'you're a weirdo for playing that instrument that only does that'. As you may be able to tell, this still haunts me somewhat but I say in a very non-boastful way that by the end of the night they wouldn't think of the banjo the same way again. This is not because of any special talent of mine but simply that for the first time the people in the pub that night heard the banjo in a different context and again saw it for what it is – an instrument, not simply a Deliverance jukebox.

Thankfully, nowadays it's a little bit easier because of the rise of Mumford and Sons and the nu-folk movement. The banjo is now used in bands galore in the popular music field – some of it I like some of it I don't but my god it makes my life easier! In a country where the banjo is much less a part of the fabric than in the US, it needed to be heard by people in a different context. It's not simply a case of making the banjo 'cool' rather it is making people aware of it in different situations and realizing an instrument is just that and doesn't need to be backed exclusively into a particular musical corner.

The bottom line of course is that I simply love the banjo. Every time I get it out the case and into my hands, a buzz comes over me. When I play it in full flow it is a feeling like no other and I barely even look at it sometimes because the love of the music just sweeps over me. There are times when I want to break it because I can't do what I want to with it but that only adds to the love of it! Whether you play clawhammer, three-finger style, bluegrass, old time, jazz or heavy metal on it simply embrace the love of the instrument. This isn't an anti-tradition rant as outlined above – the banjo world needs all manner of players but if you want to play something you think the banjo 'doesn't do' remember that at the end of it all, it is simply an instrument.

I enjoy playing bluegrass and other music in both Scruggs style and clawhammer. But is that for everyone? Is it better to stick with one picking style until...

I often get the question, “How hard is it to learn to play banjo vs the guitar?” The answer is that every instrument has its different learning curves and...

It has been a whole ten years since four boys from London, England banded together to create what would become a huge influence on our favourite instrument....