Deering Joins the Gentlemen of the Road Stopover Tour 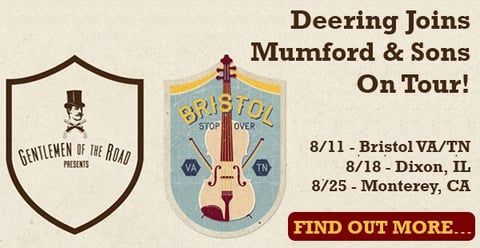 Deering Banjo Company is delighted to announce that we will be teaming up with British folk rockers Mumford & Sons on three of their four highly anticipated Gentlemen of the Road Stopover shows during August 2012. With a new album looming, Mumford & Sons have personally handpicked each location on the stopover creating a series of full day festivals, essentially turning the town into a celebration of local music, local food and of course the people who make it…and Deering will be with them every step of the way with a selection of banjos for you to try as well as enthusiastic Deering staff members offering lessons, tips, advice and a welcoming smile!

Mumford & Sons are no strangers to thinking way outside of the box when it comes to touring and giving back to their fans. In 2011, the Railroad Revival tour saw the boys from London take to the rails as part of a six stop tour of Americas South West region, traveling exclusively by vintage rail car. The three remaining  Gentlemen of the Road stopover dates come hot on the heels of similar events in Huddersfield, England and Galway, Ireland as well as the first US Stopover where they invited no less than seven of their favorite bands to join them in taking over Portland, ME including fellow Deering artists, Dropkick Murphys.

So come out and join Deering, Mumford & Sons and a host of fantastic support acts who will guarantee nothing less than a great time!