Deering recently celebrated the building of our 100,000th banjo at the 2014 NAMM Show in Anaheim, CA. The banjo was a Deering Sierra 5-string banjo and was souped-up a bit with chrome plating,  highly figured curly maple, engraved hardware, and an engraved armrest that says”100,000.”  The banjo was presented to Stan Werbin, owner of Elderly Instruments of Lansing MI, an authorized Deering dealer for over 38 years  who came on board at one of the early NAMM shows held in Chicago, IL.  The banjo was accompanied by a letter of authenticity signed by Janet and Greg Deering indicating it is the 100,000th banjo in the company’s 39 year history. 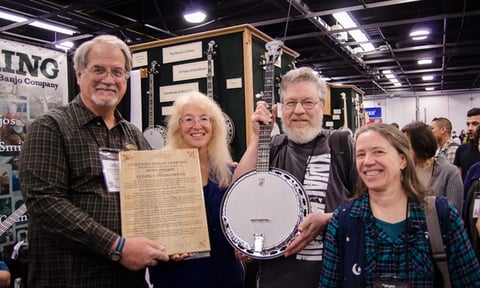 Because of modern technology and remarkable perseverance, the Deering Banjo Company has produced more banjos than any other single American manufacturer in the history of the instrument. Asked how they felt about this momentous milestone for the company, Janet and Greg said “When we set out on this journey nearly 40 years ago, our only goal was to do better today than we did yesterday and better tomorrow than we did today. If someone had told us that we will make over 100,000 banjos and become the largest banjo maker in America, we would have thought they were crazy! But here we are and we couldn’t be happier that we are able to share this milestone with our longest standing dealer, Elderly who we have been truly blessed to work with.”

For 25 of Deering’s 39 years, they were located in a suite of buildings in Lemon Grove, CA, just 5 miles from their newer Spring Valley location of today. In the early years, Greg and Janet Deering worked with a fledgling staff of no more than 2-4 employees. Today, there is a staff of 48 dedicated individuals in both the production and office personnel.  Chuck Neitzel, the only remaining employee of those early years, was asked “Did you ever think you would see Deering’s 100,000th banjo?” His response was, “Oh God no! We were lucky in the early years to make 400 per year. I never thought I would be here to see this! It is hard to explain how Deering got here. I think it is really the persistence of Janet and Greg Deering, their willingness to never give up throughout all the obstacles and challenges. They just wouldn’t quit! Much of the numbers we see have to do with the creation of the Goodtime banjos. Bringing in modern technology so we can create them in large numbers and pricing them where folks could afford them was pivotal in getting us to where we are today.”