The Deering #banjobus took to the road as Jamie Deering and Arthur Hancock embark on a two month trek across the United States to appear at a number of events across the country.

As the Deering crew gathered outside of the factory in Spring Valley, CA. Janet and Greg Deering took a moment to wish the travelers well and to present Jamie with her award for 15 years of service. Having attended her first trade show at the tender age of 6 weeks old, Jamie now looks after Deering's Artist Relations and has been key in meeting key artists including Avett Brothers, The Decemberists and of course Mumford & Sons.

Jamie and Arthur will be taking the bus, which is sponsored by Mel Bay, Remo Heads, Artistworks, Bluegrass Situation and Kavanjo Banjo Pickups to the following events over the next 8 weeks so look out for them on the road.

And don't be shy, they really are very nice people and will even be willing to teach you a banjo chord or two! If you spot them on the road or at an event, don't forget to put your picture on Twitter, Facebook or Instagram with the tag #banjobus.

Good luck Jamie and Arthur! We will see you in October! Safe Travels. 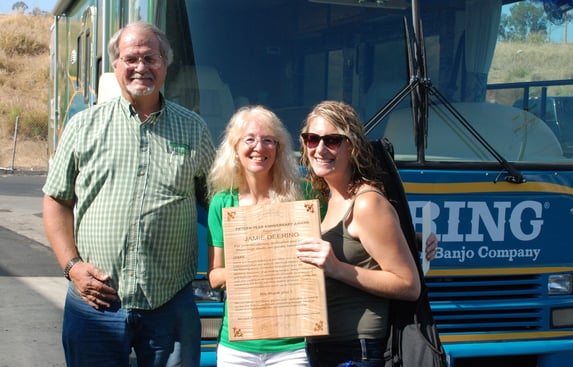 Jamie Deering stands with her parents, Janet & Greg Deering as she receives her award for 15 years of service at the Deering Banjo Company 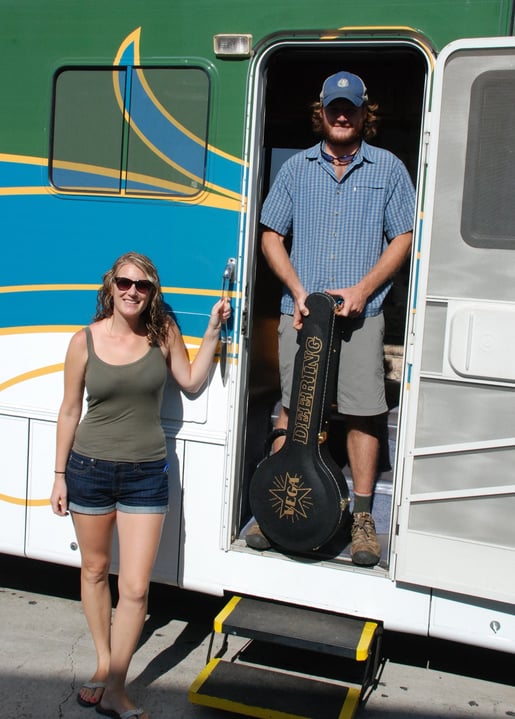 All Aboard! Jamie and Arthur get ready to leave.

Farewell! The #banjobus pulls away as the Deering crew looks on.