Firstly. our shipper, Jon Pasquariello and Financial Controller Gail Hill both celebrated their five year anniversaries. Jon is solely responsible for final QC checks and strives to ensure that your banjo is shipped on time and arrives in perfect condition, while Gail is tasked with flow of money through the company. Production Manager David Moore recieved a personalized plaque from Greg and Janet Deering to commemorate him on a successful 10 years at Deering. David is arguably the hardest working man in the facility and takes a huge amount of pride in managing his crew of more than 30 production staff to deliver the best banjos in the world, all the while constantly improving how we build and deliver them. While many of you probably would not have spoken to Jon, Gail or David, all three of them are vital to the success of our company and work tirelessly in the background to ensure an even flow throughout the business. 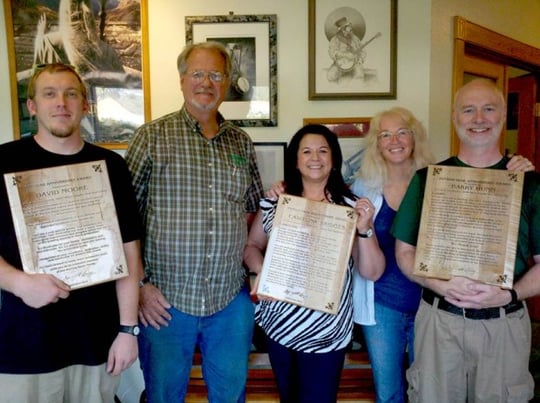 For anyone who has called into the Deering offices over the last 15 years, there is a very high chance that you have spoken to our Sales Manager Barry Hunn or our Customer Service Manager Carolina Bridges. Barry's relationship with the Deering's begun over 30 years ago when in his days as a performer, he ordered Deering's first 12 string banjo which along with the many 5 string banjos he owns, he still uses to this day. Years later, following a long stint at 'Dusty Strings' in Seattle, Barry found himself moving to San Diego to take on the role as the companies first full time Sales Manager. To date, Barry has overseen the sale of over 78,000 banjos.

Carolina, who also joined 15 years ago was not the first member of the Bridges family to work here. Her twin sons Joey and Jamey were Eagles from Greg's Scout Troop when they first begun working at Deering at the tender age of 16. They would sweep floors, clean the shop after school and before they left had become part of the crew that would build the first Goodtime models. Since then, they have moved on to have families and careers of their own, but  as Director of Public Relations, Carolina remains one of the longest serving Deering employees Looking after all of our Public Relations needs and is largely responsible for the high standards of customer service that Deering is so well known for. She also takes care of many of our artists, taking the time to really get to know each performer to give them the best support possible. Carolina truly is one in a million!

The lunch was capped off with a round of Happy Birthday to a very special lady. Please everyone join us in wishing Janet Deering a very Happy Birthday! Janet will be travelling to IBMA in Nashville on Monday, so anyone who is attending, be sure to go and say hi!

Deering would like to congratulate ALL thier employees on everything that they do to create such wonderful, quality instruments for everyone to enjoy!